The meaning and history behind amulet necklaces has changed over the years. The original meaning of an "amulet" is an object that is meant to protect the owner against danger or harm.

But, over the years, amulet charms and necklaces have become a popular fashion trend and the word is often used to describe any sort of symbolic charm that can ward off danger. Now, almost any special pendant that is wore as a necklace can be seen as an amulet necklace.

Amulets can be charms that include coins, rings, animals, gems, or other symbolic colors or markings. An incredibly popular amulet is the evil eye, which many designers have more recently incorporated into their designs. Designers have also been inspired by the amulet necklace charm to create other delicate charm necklaces that fit the look and feel of the rest. These tiny necklaces can hold a lot of meaning and are perfectly on trend right now. You can see these types of necklaces all over young Hollywood celebrities.

So, if you are feeling spiritual, want something symbolic, or just love the look of this new fashion trend, take a look at these delicate amulet necklaces: 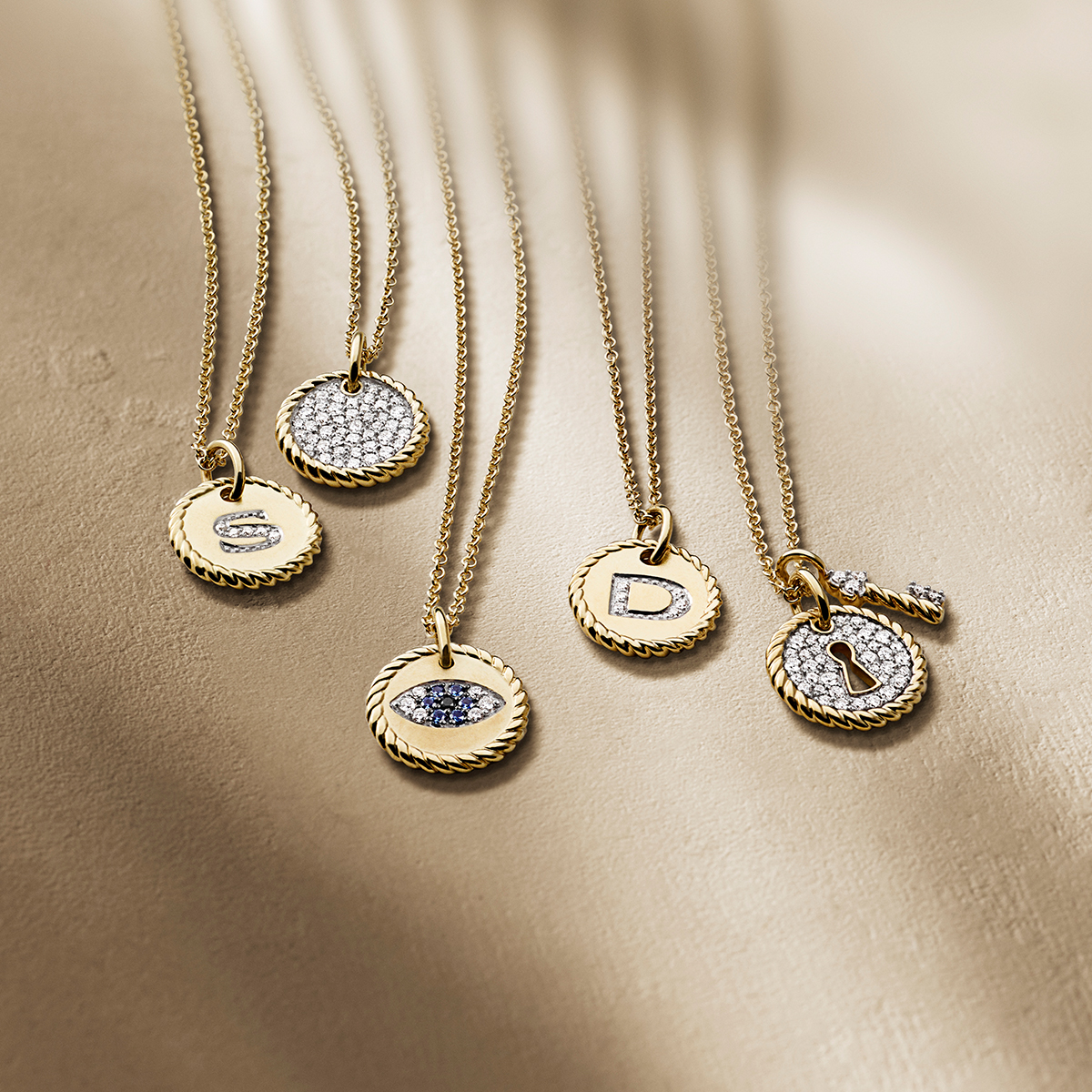 David Yurman is a brand known for their iconic Cable motifs. These new additions in the cable collection include small charm necklaces, including some that might have symbolic meaning or would be categorized as amulet necklaces. The evil eye necklace for example, pictured here, is a classic symbol used as an amulet to ward off evil spirits. As the legend has it, receiving an evil eye from someone will cause injury or misfortune. So, it is actually not the tradition to wear an evil eye as an amulet alone without a good luck charm as well. The two together would act as a powerful force against any back luck.

David Yurman's collection of delicate charm necklaces is a beautiful adaptation of this hot trend in Hollywood. 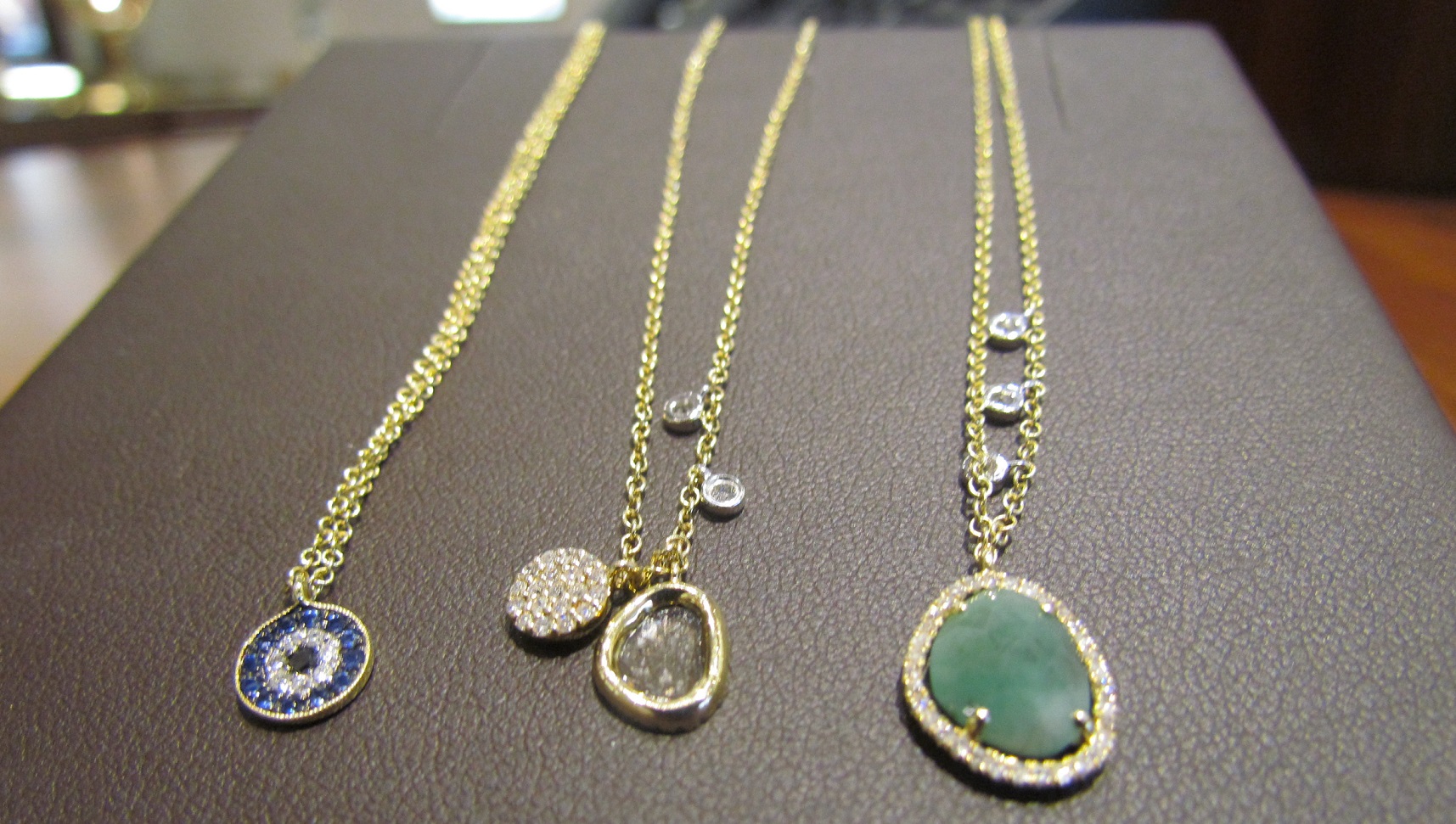 The three pictured necklaces are both classic and modern interpretations of the amulet necklace. The necklace featured on the very left is a more accurate representation of what would actually be worn as an amulet relative to the evil eye. This symbol, called the nazar, is and eye-shaped amulet that protects against the evil eye.

The other two necklaces featured here are not traditional amulet necklaces; however, they are a modern interpretation of the trend. The center necklace features diamonds weighing 0.21 carats and the necklace on the right has a beautiful emerald stone in the middle. Gemstones were often used in amulet necklaces in the past, especially if they were carved or had any special messages on them. These two necklaces showcase a more glamorous way to wear amulet charms.

These stunning, delicate necklaces fit perfectly into the new amulet necklace trend. Some of these necklaces hold more meaning than others, like the classic Italian horn, or the "cornicello." The cornicello is a popular amulet that is worn to protect against the evil eye, like the nazar. The wearer of the cornicello is meant to have good fortune.

Other popular amulet charms are featured in this display, including an angel wing and arrow. The angel wing is symbolic of protection against darkness and the arrow is physical protection against any dark forces. But, each of these charms can be interpreted in their own way to mean something special to the owner. 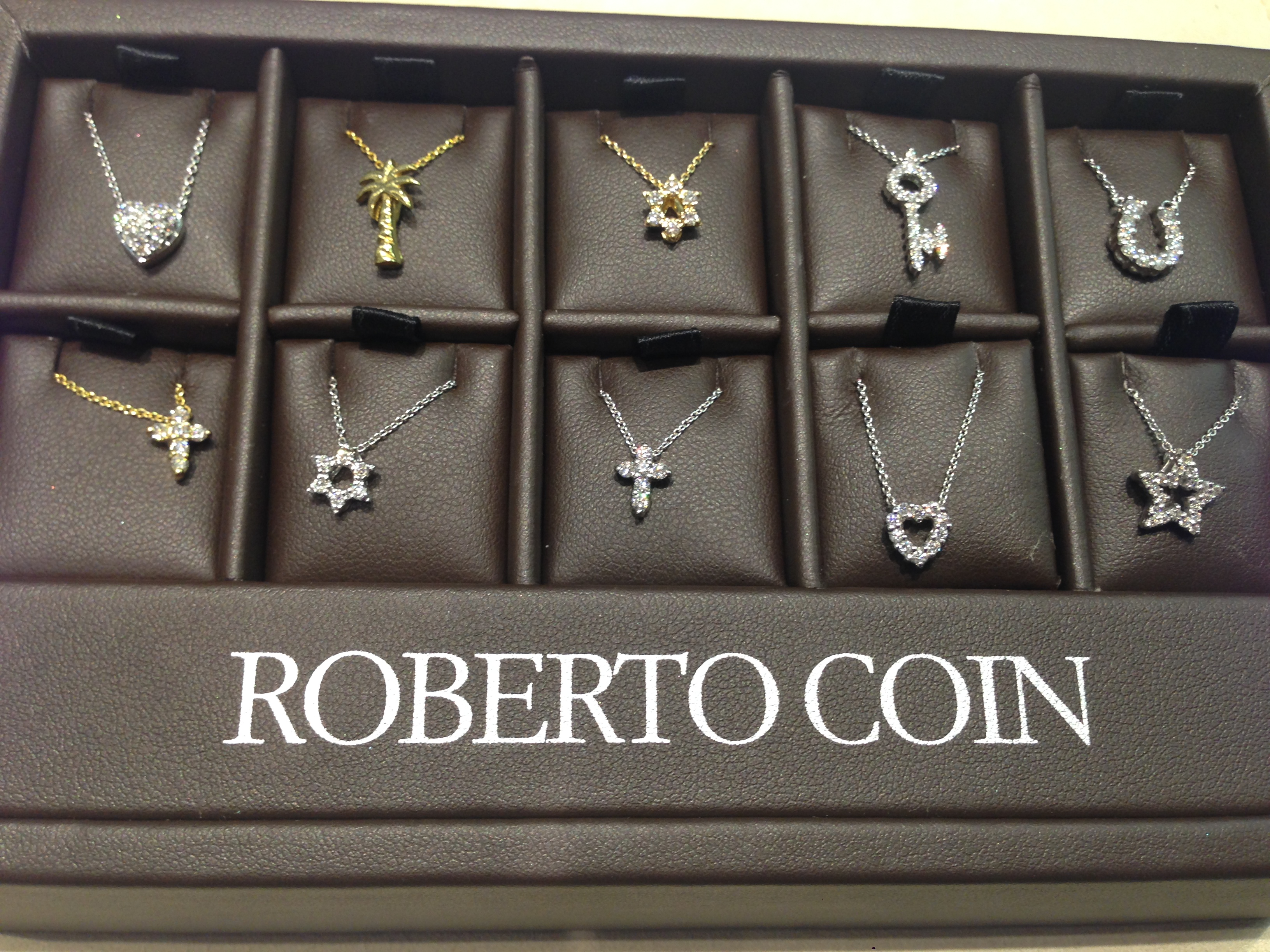 Following the delicate charm theme of many of these amulet necklaces, Roberto Coin released a line of necklaces called Tiny Treasures. According to the designer, "Tiny Treasures is a collection of whimsical 18K gold and diamond pendants including the famous 'Circle Pendant' by Roberto Coin, a symbol of the harmony of life."

These small charm necklaces can be symbolic and can even fall under the category of amulet pieces, depending on the thought and meaning behind them. Other pieces are just a whimsical and fun play on this new trend.

All of the amulet charms and necklaces featured here are available at any of our five retail locations. If you'd like to see them in person, book an appointment or call us at 877-845-6647 for more information.