10 Awesome Proposal Ideas That She Can't Say No To 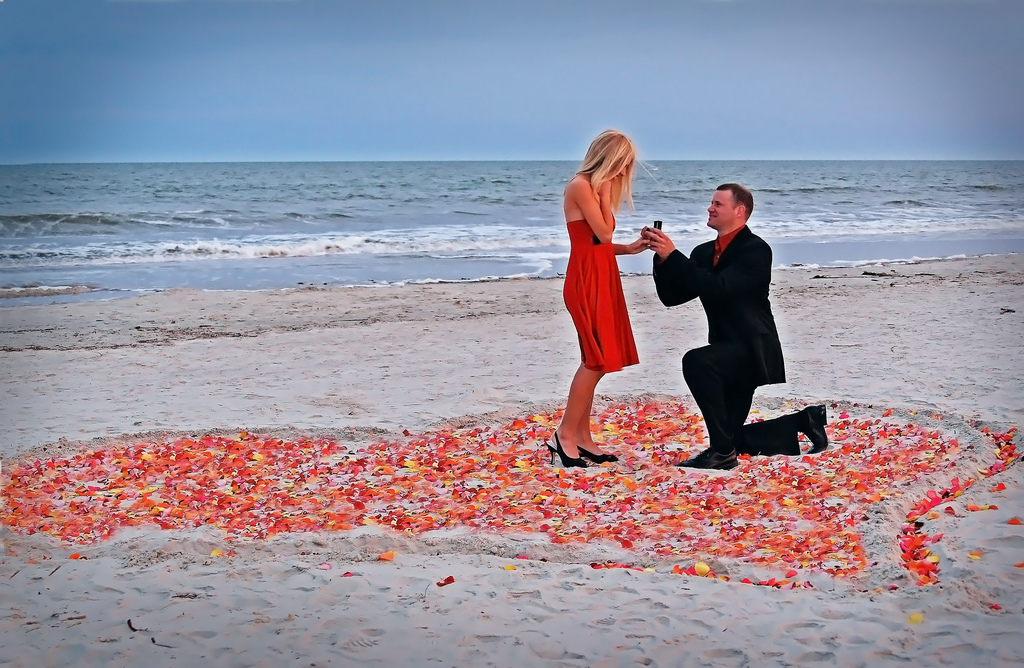 Proposing to your girlfriend is a big moment in a man's life. From that moment on, your love is permanently displayed on her ring finger.

The story of how you asked will be retold countless times. First to her parents, followed by her family, and then to every friend who spots the new ring you got her. If you're going to have a story about you told countless times, you better do everything in your power to make sure its a good one.

Now-a-days with Facebook and YouTube, there are elaborate proposals going viral all the time. The bar is set high and its up to you to make a plan that will wow her.

To help you brainstorm the perfect way to pop the question, we've compiled our top ten proposal ideas. These proposals are sure to make her say yes, so check them out:

Have you ever dreamed of a public proposal? Do you want all eyes on you and your loved one as you commit to a life together? Then look no further as the flash mob will guarantee it. When Jamin wanted to pop the question, he decided to recruit some fellow dancers to surprise his girlfriend. He chose downtown Disney for his performance, because what better place is there to gather a crowd? I should warn you, if you're thinking about surprising your loved one with a flash mob proposal, make sure you've got some moves. Jamin sets the bar pretty high in this one.

Idea #2: Plan far in advance to add something special

After the first date, Jack knew he had found the one. He was so confident that he immediately started planning his engagement video. Over the course of four years, Jack traveled the world with his soon-to-be-fiance while recording his proposal. Like a true gentleman, he then gathers friends and family to view the video and gives her a public proposal. If traveling the world isn't in your budget, this concept can be pulled off using any locations. The most important element is planning in advance.

Idea #3: Surprise her at work

Being proposed to at work is a dream for some women. This is where many of their friends and co-workers are guaranteed to see this monumental moment in her life. What if your girlfriend doesn't work in an office though? That wasn't a problem for the boyfriend of Chicago Bulls dancer Ariana. He embraces the large audience and makes this a proposal to remember.

Nothing is better than going to see your favorite artist live. At least that's what I used to think until I saw this. A Justin Timberlake concert AND getting proposed to? This has to go down as the best day of Kim's life, and if not I want to know what could have possibly topped this. Good on you John Clemons, and good on you JT for helping this guy make his girl feel like a star. If you want to recruit help for your proposal it could be difficult to land an A-Lister like Timberlake. That being said, there are plenty of romantics out there and it never hurts to ask around.

Planning a proposal is no small feat. So planning a proposal, scavenger hunt, party with 50 of your closest friends and family, and a video crew to record the whole thing is a massive commitment. Jay takes this challenge on and executes perfectly when proposing to his girl friend Mary Beth. Normally its obvious what's happening after the first clue, so planning this on her birthday was absolutely genius. If you want to plan a proposal like this, choose places for your girlfriend to go that are important to her. A timeline of important places you have been on dates is always a classic idea.

Lauren has a great voice which landed her a spot of The X Factor. Her boyfriend David saw his opportunity and knew this was the perfect time to propose. You can tell that this was surprise for everyone by the family and crowd reactions. Even Simon Cowell was smiling from ear to ear! I'm not sure how far Lauren made it in the show, but its safe to say she was the star of this episode. opportunity like this don't always present themselves. So if you want to surprise her like this, don't be afraid to seize the moment when it comes around.

Lip dubs became massively popular a few years back, but no trend is complete until it is used to propose marriage. This guy's plan to do a live lip dub with his girlfriend sitting in the back of a riding car is brilliant and adds to the uniqueness of this video. This proposal idea is awesome but make sure you have friends that are willing to learn a choreographed dance.

If you or your significant other is a movie buff, then this may be the perfect proposal for you. Hiring actors to re-enact your personal romantic comedy and a film crew to make a theater quality trailer may be the most elaborate proposal on this list. David pulls this off perfectly, and you can tell he practiced the actual proposal a few times. The reaction from the actors on screen was timed perfectly and just goes to show the level of planning that he put into proposing to Nicki. If you want to make a movie trailer like this be sure to check with local theaters to see if they will let you play it prior to the start of a movie.

Most women would describe being proposed to as magical. The guy in this video took that to the next level when he recruited a magician to help him. There's no way she saw this coming, and it looks like a great surprise. If you want to take this idea to the next level, try learning the trick yourself!

I can't think of many things more exciting than getting a puppy or getting engaged. Getting both at the same time probably made this the best day of Quinn's life. Robert really knows how to make his girlfriend happy, but more importantly knows how to capture it. The two head mounted go-pro cameras are a great example of going the extra mile to create a moment she will remember forever. Before you decide to do this, make sure you consider how big of a commitment a dog is.

Are you thinking about proposing soon? Don't have the perfect ring just yet? Consider setting up an appointment with one of our engagement ring specialists who will help you find the ring of her dreams!