Keep reading to learn about each of these unique diamond shapes! 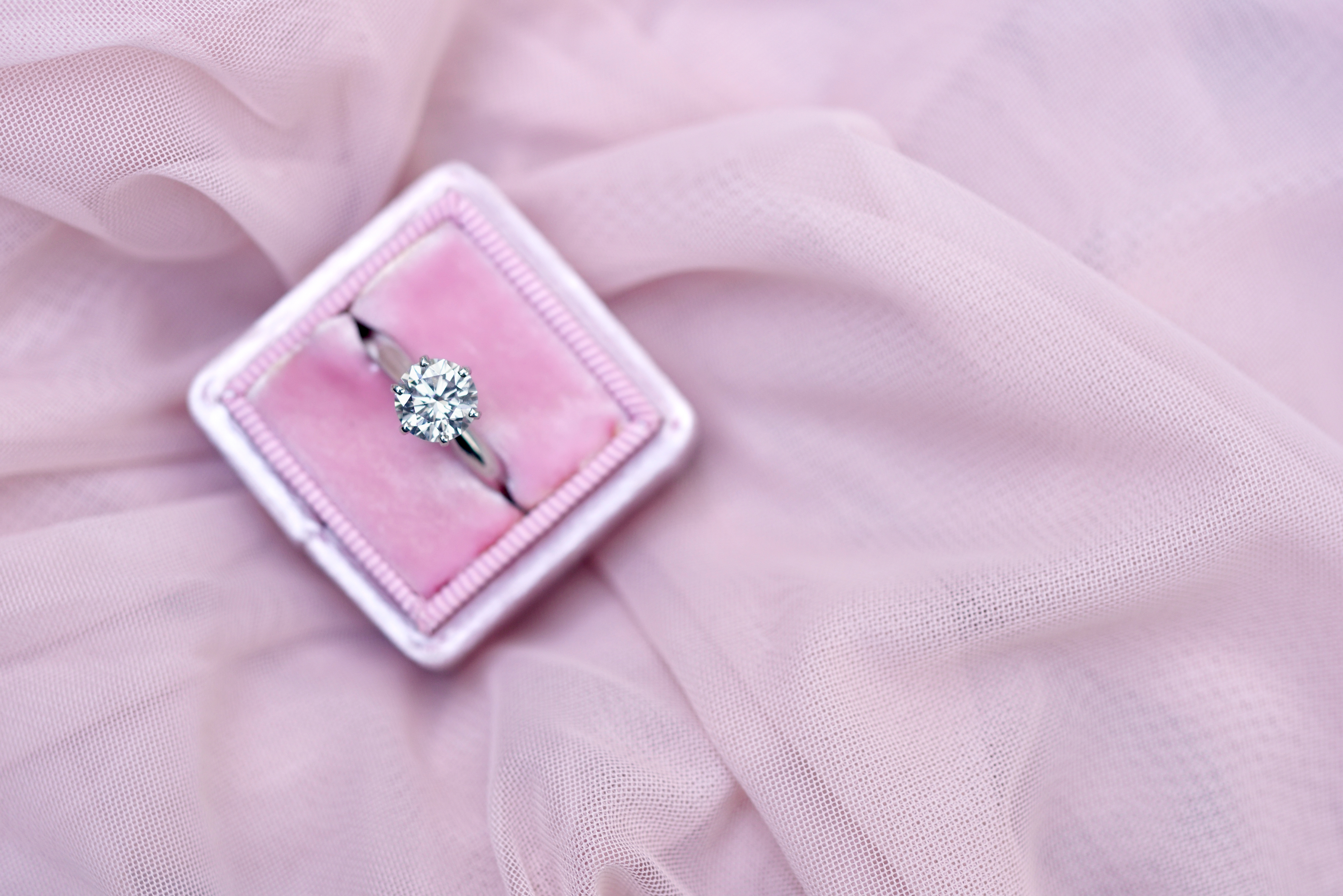 While fully circular shaped diamonds have been around since the 1800’s, the round diamond shape as we know it today was first cut around 1919 by Russian mathematician Marcel Tolkowsky. Tolkowsky calculated the precise number of cuts necessary to create the ideal diamond shape, which translated into 58 eye-catching facets, more than any other kind of cut. The purpose of this cut is to maximize brilliance and fire of the diamond by reflecting the light extremely well. Over time his formula has been perfected, and today it remains the most popular diamond cut on the market, especially for engagement rings. More than 60% choose the round for their engagement ring, and according to the GIA, 75% of all diamonds sold on the open market are round. Due to its popularity and the amount of rough diamond lost during cutting, the round shape diamond is also one of the most expensive shapes. Both Britney Spears and Mila Kunis rock beautiful round diamond engagement rings. 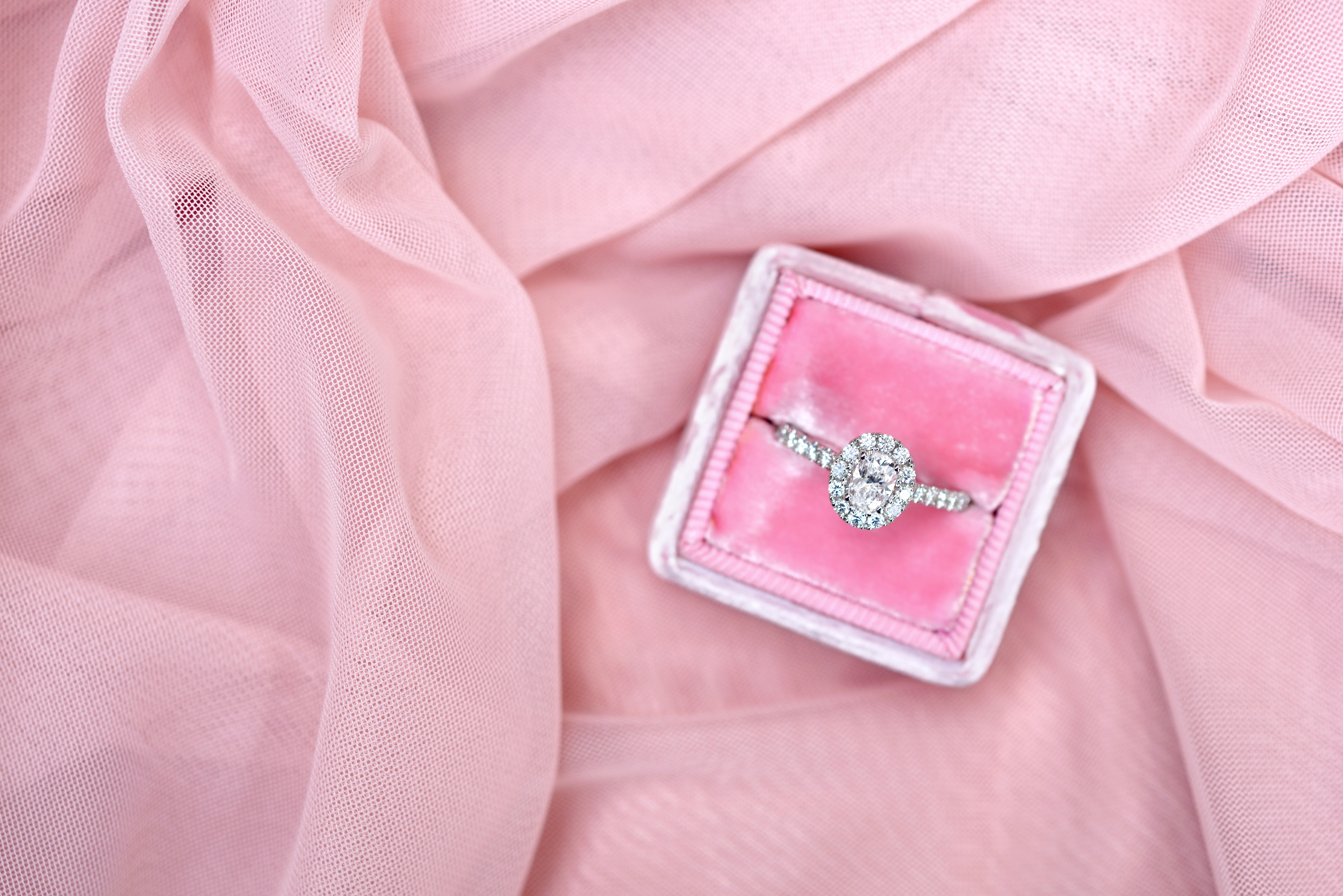 The oval is one of the oldest diamond shapes dating back to the 14th century. These early oval cuts, however, were crude. The oval as we know it today was created in 1957 by Russian-born diamond cutter Lazare Kaplan. The invention earned him a spot in the Jewelers International Hall of Fame. The elegant cut features 58 facets, which emit as much flashing fire as a round cut. A bonus of the oval, though, is that it appears larger than a round of the same carat weight. The average 1 carat oval diamond has a 10% larger surface area than the average 1 carat round diamond. It is also a more affordable option than a round as jewelers don’t need to cut away as much of the rough diamond. One of the most famous oval diamonds in the world is the Koh-i-Noor. The supposedly cursed stone has a long history of ownership. Starting in India around the 13th century, it eventually ended up in the hands of Queen Victoria (1819-1901). At the time the stone weighed 186 carats, but had a very dull and irregular appearance. Unhappy with its current state, Prince Albert, Victoria’s husband, had the stone recut. The result was a beautiful oval stone now weighing 105.6 carats. The Koh-i-Noor was worn frequently by Victoria as a brooch, and after her death reset into a crown. Only females in the royal family have worn it since, as it allegedly brings back luck to men. It is currently a part of the royal jewels and on display in the Tower of London. Perhaps the most famous example of an oval engagement ring is the sapphire beauty worn by another famous royal, Kate Middleton. The 18 carat ring originally belonged to Prince William’s mother, the late Princess Diana. 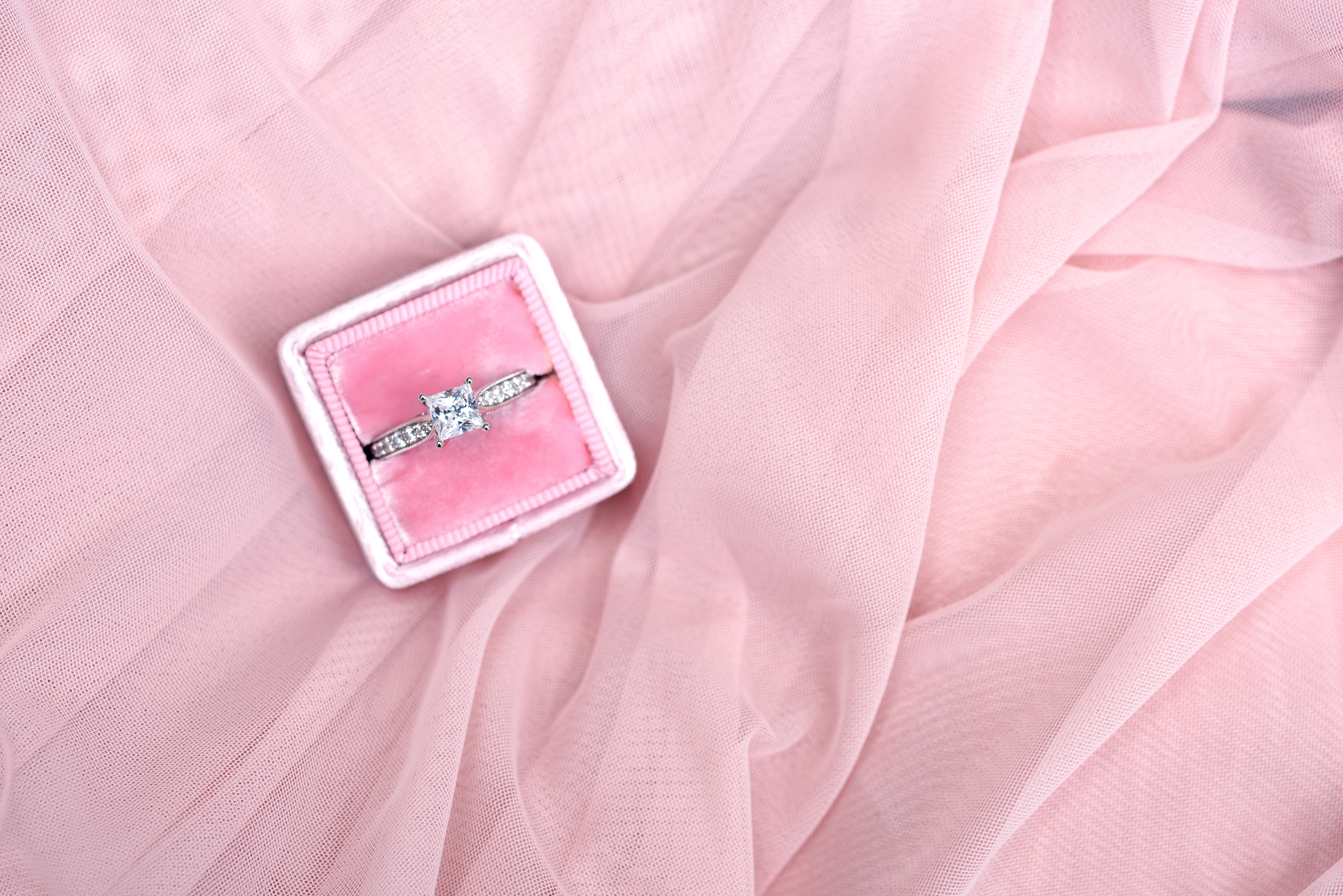 The distinctive princess diamond is one of the most popular shapes for engagement rings. The square shaped diamond with sharp corners, which appears as an inverted pyramid from the side, is clean and modern. It traces its beginnings back to 1971. Basil Watermeyer patented a new diamond shape called the Barion cut, a combination of his and his wife Marion’s names, which proved very difficult to create because of the need for incredibly symmetrical lines. In 1979, the Quadrillion cut was patented. While similar to the Barion, the Quadrillion had 49 facets as opposed to the Barion’s 80 plus. The name "princess cut" was originally used in connection with another diamond cut, also known as the "profile" cut, designed by Arpad Nagy, a London cutter, in 1961. Today’s modern princess shape, the name of which was made popular by diamond cutters Ygal Perlman, Betzalel Ambar and Israel Itzkowitz in Israel, is a combination of the Barion and Quadrillion. This square stone features 58 facets in a similar position to that of a round cut diamond and therefore offers a similar shine. As princess shape diamonds use 80% of the rough stone, they are significantly less expensive than a round stone, which uses only 40%. The less the cutter can use, the more expensive the diamond will be. 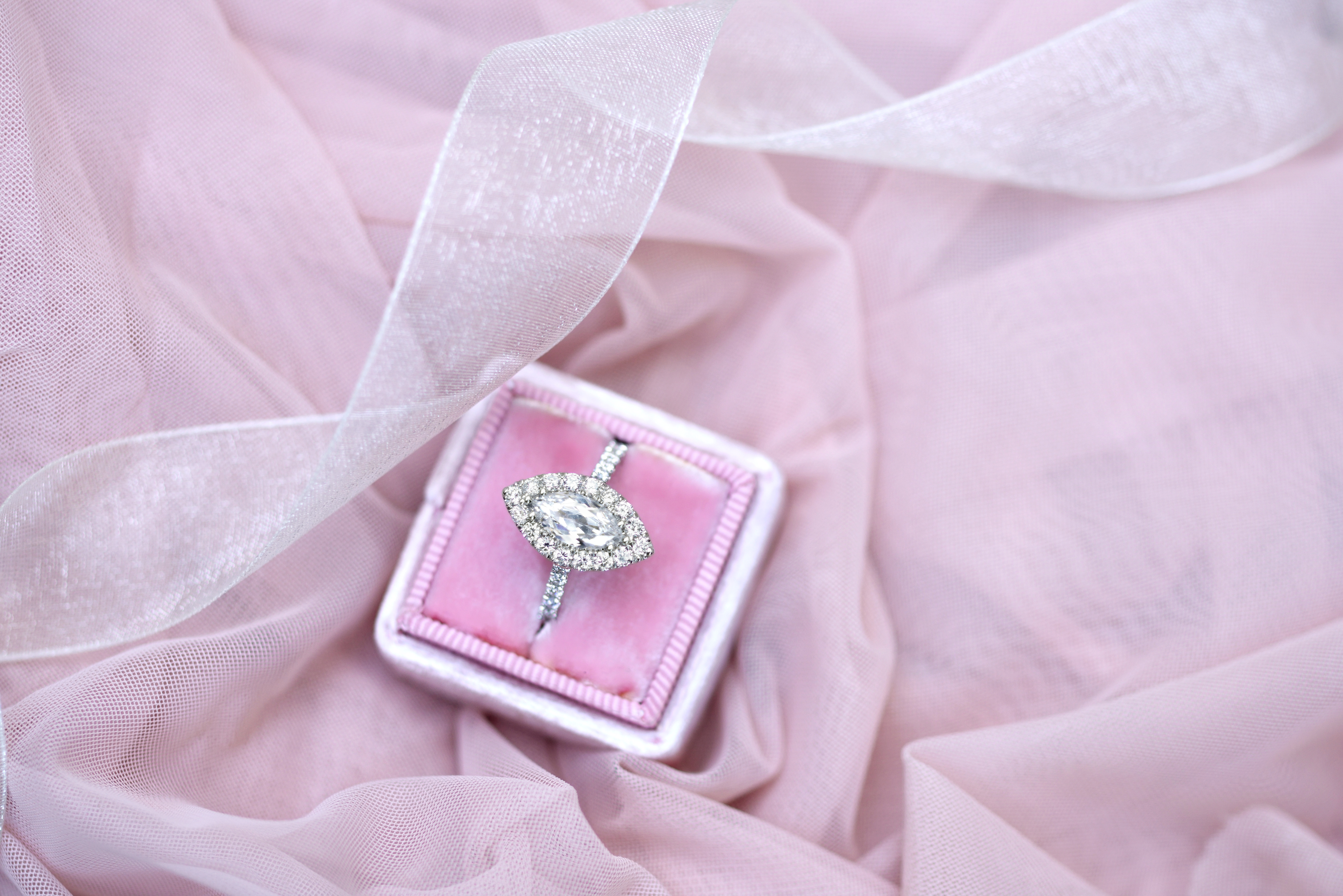 The beautiful elliptical marquise shape diamond has an interesting history. In the 18th century, King Louis XV of France (1710-1774) commissioned a jeweler to cut a diamond in the shape of the lips of his favorite mistress Jean Antoinette Poisson, the Marquise de Pompadour (more commonly known as Madame de Pompadour). The name “marquise” refers to Madame de Pompadour’s title, which is above a countess but below a duchess. Marquise diamonds are also often referred to as “navette” diamonds, which means “little ship” in French, because of their boat-like shape. The remarkable thing about this shape is that the expertly crafted angles work in tandem to give off the impression that the stone is larger than it really is. Achieving this cut is quite difficult; if the symmetry is off even by a tiny bit, the diamond’s sparkle and overall look is greatly diminished. We love Victoria Beckham and Catherine Zeta Jones’ marquise engagement rings! 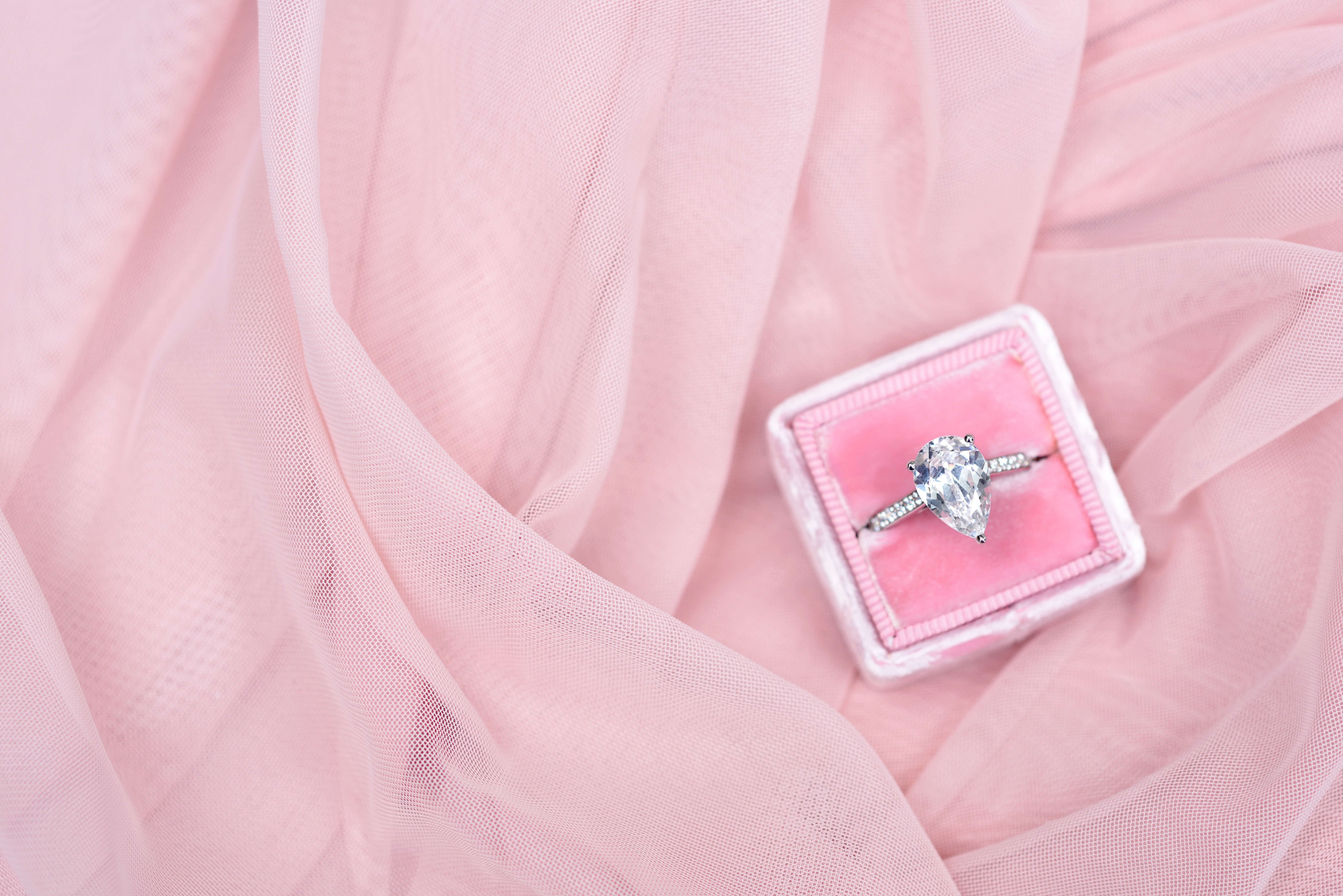 The pear shape, often referred to as the teardrop cut, was first introduced in the mid 1400’s by Flemish diamond polisher Lodewyk van Bercken. This diamond combines the brilliance and design of the round and the marquise cuts into one unique shape. Despite the positive response to the shape, when it first debuted many people were not happy with the amount of rough diamond lost during the cutting process. Over time, however, the pear shape grew in popularity. It has graced the hands of celebrities such as Victoria Beckham and Katherine Heigl, but it’s Elizabeth Taylor’s pear shaped diamond that takes the cake. Known as the “Taylor-Burton Diamond,” this 69.42 carat pear shaped diamond was originally cut by Harry Winston and sold in a platinum ring in 1967. In 1969, the ring was put up for auction and was bid on by Richard Burton (Taylor’s then-husband), however it was Robert Kenmore, owner of the parent company of the jewelers Cartier, who won the auction. Burton, determined on getting the diamond for Taylor, called Kenmore the next day, and ending up buying the diamond from him for $1.1 million with the condition that it be displayed at Cartier for a period of time. Taylor eventually reset the diamond into a necklace, which she wore to Princess Grace’s 40th birthday and the 42nd Academy Awards. After her divorce from Burton, Taylor sold the diamond for $5 million, and used the proceeds to build a hospital in Botswana. 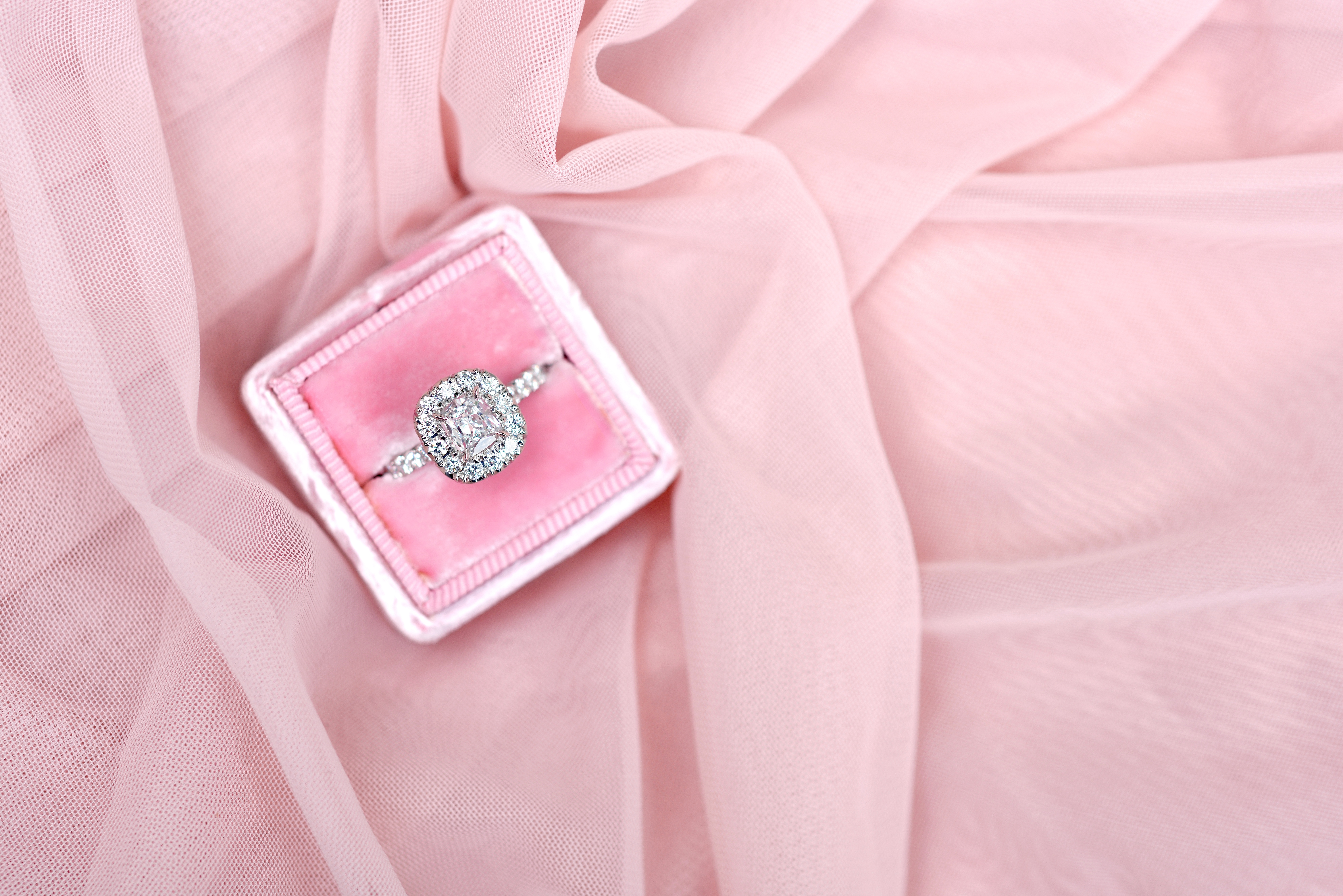 The romantic cushion shaped diamond’s origins can be traced back to the 1800’s. At the time, the cut was referred to as the “mine cut,” named after the Brazilian diamond mines (called “old mine” once diamonds were found in South Africa as well). While similar in shape, today’s cushion cut has 64 facets while the “mine cut” had 58. Other cuts like the table, Peruzzi, and candlelight have also been said to have influenced the modern cushion. The many facets that make up the cushion allow for more light to flow through the stone, making it one of the most brilliant of all cuts. Cushion cuts also retain their natural color better than other diamond cuts, which is why many of the eclectic colored diamonds are cut as a cushion. Some of the most famous and largest diamonds in the world are cushion cuts. This includes the Hope Diamond (45.52 carats), which is currently on display at the Smithsonian, and the Regent Diamond (140.5 carats), which is currently on display at the Lourve. In 2003, Tiffany & Co. introduced a cushion cut diamond into their Legacy collection, which celebrates the five most iconic engagement ring styles. It’s safe to say that the cushion is one of the most popular styles of today. 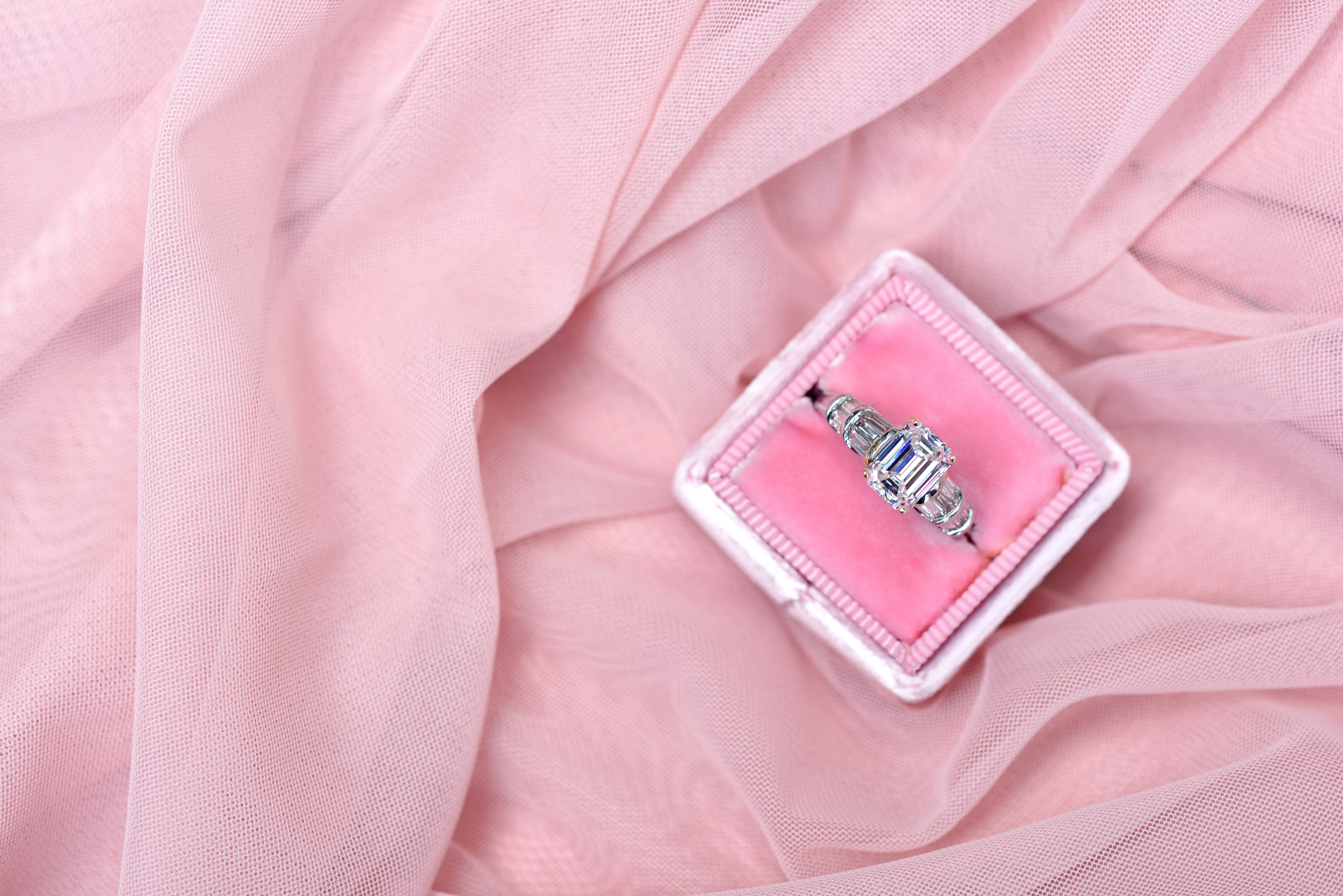 Emerald cuts have been around for thousands of years. First primarily used on emerald stones, diamond cutters eventually began to incorporate the cut into diamonds as well. The name “emerald cut” was not used until the 1920’s, when it reached the peak of its popularity. The emerald cut’s clean lines and symmetry fit in perfectly with the art deco style of the decade. An emerald shaped diamond is created by using step cuts, which, as the name suggests, resemble steps on a staircase. The ideal ratio for the emerald cut is 1.5:1. While the openness of the emerald cut is lovely, this does mean that it is easier to spot any imperfections so picking a high quality diamond is essential when choosing this cut. A clarity grade of VS2 or above is recommended. Some high profile emerald beauties include the ones featured in Amal Clooney (7 carats) and Beyoncé’s (18 carats) engagement rings. 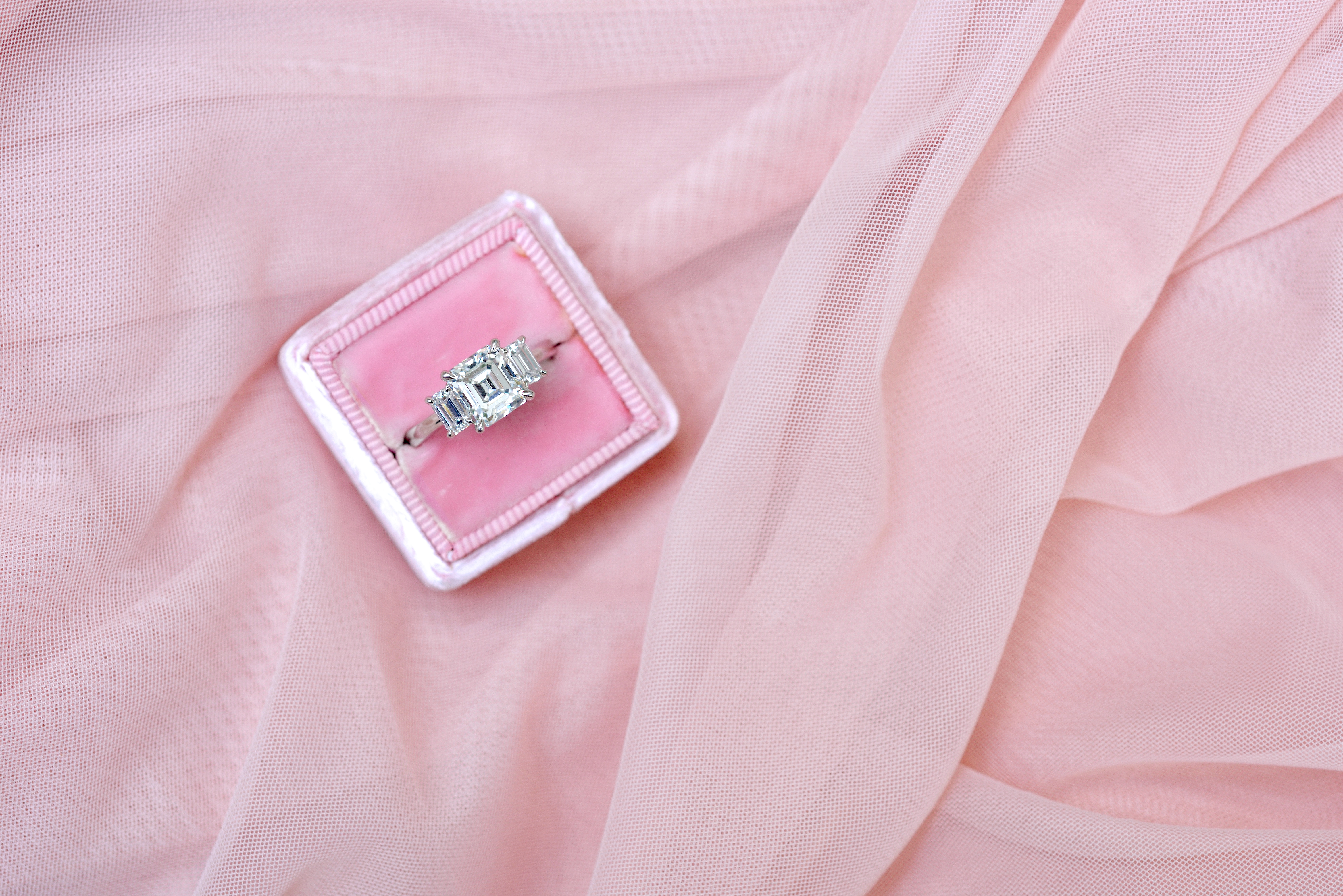 The Asscher shape diamond was named for the Dutch company that created it, the I. J. Asscher Diamond Company (today known as the Royal Asscher Diamond Company), established in 1854. The company was founded by Joseph Isaac Asscher, and continues to be a family run business. In 1902, Joseph’s grandson, also named Joseph, developed the Asscher shape diamond. Similar to the emerald shape but in square format, Joseph was able to create a more brilliant cut by giving the diamond larger step facets, a higher crown, and smaller table. The classic looking Asscher has 58 facets and cropped corners that give it the appearance of an octagon. Until World War II, the Asscher family had a patent on the cut, so while other companies tried to imitate it, no one could reproduce it. The Asscher cut, like the emerald, reached the high of its popularity during the 20’s, and is seen as a classic example of art deco design. In 1999, Edward and Joop Asscher improved upon their ancestor’s design by creating the Royal Asscher cut. Using modern diamond cutting technology, they raised the crown and added more facets for a total of 74, while keeping the brilliance and classic look of the original design. Since the redesign, the Asscher has made a major comeback. One of the most famous Asscher diamonds is the 33.19 carat Krupp Diamond, first worn by steel magnate Alfred Krupp’s beloved wife Vera and later bought by Richard Burton for his then wife, Elizabeth Taylor. Taylor wore the ring nearly every day and in nearly every film after receiving it.

Which shape is your favorite? Browse our collection online or stop by and check out these diamond shapes in person!