What Is A Conflict Or Blood Diamond? – Long's Jewelers Skip to content

What Is A Conflict Or Blood Diamond? 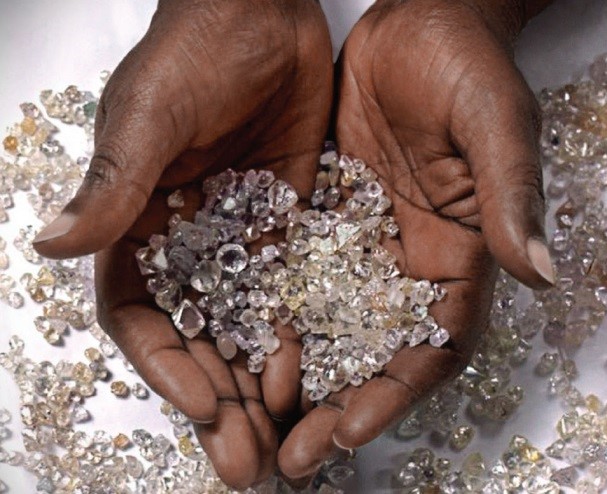 We often get asked about "conflict" or "blood diamonds," a term which was made popular by the 2006 movie Blood Diamond. In case you haven't seen the movie, it's set against the backdrop of the Sierra Leone Civil War from 1996–2001. The film follows the story of Danny Archer, an ex-mercenary from Zimbabwe, and Solomon Vandy, a Mende fisherman, as they fight over the possession of a priceless diamond.

Blood Diamond put the term on the map and has since made people curious about these types of diamonds. We always tell people that blood or conflict diamonds describe diamonds mined in a war zone and sold to finance an insurgency, an invading army's war efforts or a warlord's activity.

Conflict or blood diamonds have been a hot topic for many years now because consumers want to know where their diamonds are coming from and choose not to support any diamonds that fuel conflict. At Long's, we make every effort to support regulations that prohibit blood or conflict diamonds. But, how can we be so sure?

Let's take a look at the history behind these diamonds and how we can assure our customers that our diamonds are, in fact, conflict-free:

Just fifteen years ago, The Kimberley Process (KP) started when Southern African diamond-producing states met in Kimberley, South Africa in May of 2000. During this meeting, they discussed ways to stop the trade of conflict diamonds and ensure that diamond purchases were not financing violence by rebel movements and their allies seeking to undermine legitimate governments. The Kimberley Process requires that any country participating in the agreement provide a certificate that cites the origin of rough diamonds. In addition to this, in order to receive the certificate, the country of origin affirms that the income from the diamonds does not go to warlords or to the funding of conflict in any way.

The Kimberley Process is open to all countries that are willing and able to implement its requirements. The KP has 54 participants, representing 81 countries, with the European Union and its Member States counting as a single participant. KP members account for approximately 99.8% of the global production of rough diamonds. In addition, the World Diamond Council, representing the international diamond industry, and civil society organizations, such as Partnership-Africa Canada, participate in the KP and have played a major role since its outset.

How can a diamond really be “conflict-free”?

A diamond, or other mined precious commodity, could be legitimately labeled “conflict-free” if its journey can be tracked from the mine to the jewelry store.

Most US diamond sellers have adopted a zero tolerance policy regarding conflict diamonds. For example, Lazare Kaplan International Inc., a diamond manufacturing and distribution company based in NYC, explains that they are a founding member of the UN Global Compact and a certified member of the Responsible Jewelry Council. This company actively supports policies that prohibit the trade of conflict diamonds and that prevent money laundering and terrorism related to blood diamonds. Lazare also makes it very clear that they comply with clean diamond trading and anti-money laundering legislation, such as the Clean Diamond Trade Act.

Many diamond sellers have openly condemned and combated the trade of blood diamonds and have promised to comply with the World Diamond Congress.

The Jewelers Association of America speaks for us all when they say, "We believe one conflict diamond is one too many. Diamonds are meant to be a symbol of love and we abhor how rebel groups used them to fund African conflicts.”

Are there any more blood diamonds?

The amount of blood diamonds available in the US market has dropped dramatically because of the new ethical standards and origin tracking process. For example, diamonds that come from the Marange region of Zimbabwe are considered suspect and are banned from RapNet, the Rapaport Diamond Trading Network, because of international concern over human rights abuses, use of diamond profits to encourage a corrupt regime, and U.S./EU sanctions prohibiting the diamonds from entering the U.S. or EU member states.