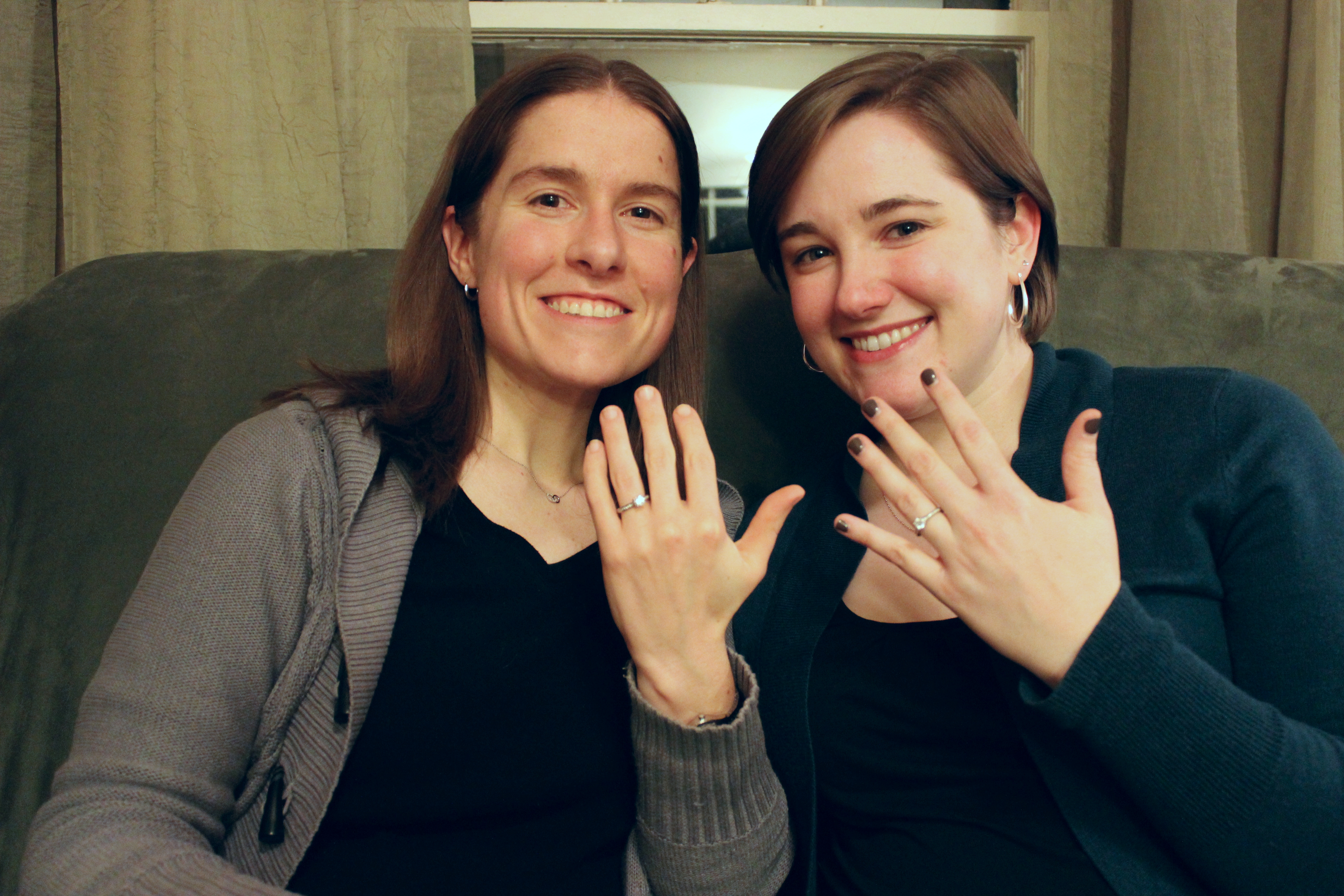 There are a lot of traditions that are associated with weddingproposals. My fiancée Ellen and I also knew many of those traditions may not be followed. We met online in February of 2013, moved in together in September of 2015, and started the classic marriage discussion shortly thereafter. What are the rules when it’s two ladies? Who proposes first? Do we both get rings? Do we both want diamonds? Is this going to be awkward when we enter a jewelry store or is the business going to be stoked to see two diamond purchasers? What is my budget? What is her budget? Should it be the same?

We could sit around and hypothesize all day long, but being the type A person I am, I wanted to get the ball rolling fast. We decided on a game plan: we would find a store, show each other what we liked, and then return to buy a ring for one another separately. As far as the proposals, we decided I would propose first when I was ready and then Ellen would propose shortly thereafter.

​After reading endless reviews we decided Long’s would be a great place to start our ring search. Long’s had great customer service reviews which was very important to us as a “non-traditional” couple.

Upon entering Long’s, we were graciously greeted and helped promptly. We told our consultant Tiffani that we were there to look at engagement rings and she ushered us over to the showcases. Tiffani spent a vast amount of time allowing us to try on rings, helping us decide on the styles we liked, educating us about diamonds and settings, and leaving us feeling confident that upon our individual returns, we could find the perfect rings for each other at Long’s. Without Ellen’s knowledge, I returned to Long’s a week later. When I arrived, Long’s had brought in a ring from Burlington for me to look at as well as several others I had asked about. After reviewing all my options, I decided on the perfect ring for Ellen. Once again the employees at Long’s were very helpful assisting me throughout the whole process of choosing a diamond, setting, and metal that fit my budget. I truly believe that the employees at Long’s wanted me to find the perfect ring for Ellen as much as I did.

Now that I had the perfect ring, I needed the perfect proposal. Finally the day arrived, Tuesday December 16. That day I had arrived home a few hours before Ellen and I put all the pieces into place for my proposal. When I got home, Ellen was out of the house at her oral exam to complete her Master’s degree. Right before Ellen arrived home I laid out a “congratulations card” for her to open. I knew Ellen wouldn’t think anything of a congratulations card as she had just earned her degree and we exchanged cards often.

After pacing what seemed like miles in my living room, she finally arrived home. I tried to play it cool as she noticed the card on the table and asked if she should open it. I said “Yes absolutely.” Inside the envelope was not a congratulations card, but a will you marry me card with a “Will you marry me?” pressed penny inside (she collects them and I had it custom made). I stared at Ellen’s expression as she opened the card, looked puzzled, and then asked with excitement and disbelief “Wait are you serious?” Without answering I broke out my notes, knelt down on one knee, expressed my feelings for her, presented the gorgeous ring from Long’s and asked, “Ellen will you marry me?” Her “Yes, of course,” her smile, and her embrace made me feel like I was the luckiest girl in the world. I immediately then told her to grab her coat and jump in the car. She was shaking in the car as she called her friends and family still having no idea where we were going. I drove the two of us to our favorite restaurant where I had her best friend and her husband waiting for us to celebrate with a delicious meal.

Fast forward to about a month later. We both knew Ellen would propose several weeks later, but the exact plan was unknown to me. Ellen had gone back to Long’s to pick out my ring about a week before I proposed. Eventually my knowledge of Ellen’s proposal plans trickled in. It started when one day I was looking at my phone calendar and I noticed it said on Saturday Jan 17th (23 months after our first date) “We Have Plans.” I was puzzled because I had no recollection of what the plans were or writing that in my phone. I asked Ellen if she wrote it or if I was going crazy? Her smile let me know she had put it in my phone and there were secret plans in the works.

On the morning of Saturday the 17th she told me to stay in bed as she banged around in the kitchen making breakfast. She had custom made mugs with the words “Let’s have coffee together…” and “For the rest of our lives…”. We ate breakfast, watched episodes of our favorite shows, and then she played a song that had special meaning and read me a card. Over the course of the rest of the day, we went out and about to several favorite spots. At each of them, Ellen played another meaningful song and described how the place or activity played an important role in our relationship. This walk down memory lane led up to Ellen’s proposal that evening, when she nervously entered the living room with champagne and a box from Long’s. She played one last song, read one last note, and then got down on one knee to ask me to marry her. I said “Yes!,” we popped the champagne, and then headed out to enjoy a delicious dinner. The most exciting part was letting our friends and family know that we had both officially proposed!

Are you still looking for the perfect engagement ring? Let us help you find it! Schedule an appointment with a diamond expert or visit any of our five retail stores to see a big selection of diamonds and ring styles.