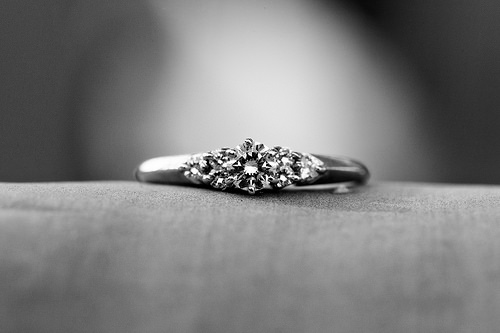 You might have thought at some point, who ever decided that diamond engagement rings were the way to symbolize eternal love? And although they are stunning, they also can be a big investment. So why did these types of rings become the standard for engagements?

It's important to understand that there are many modern day alternatives to the classic diamond ring, like gemstone or vintage rings. But, a diamond engagement ring is the classic symbol of love that has become so deeply rooted in our culture.

Dating back all the way to 2800 BC, it has always been customary to want to mark or symbolize a union between two people. Before modern day sophistication, there was a natural instinct to find a makeshift engagement ring. Even cavemen used to tie cords of braided grass around the wrists and ankles of their chosen partners.

Even with a long history of wedding rings and tokens, it wasn't until more recently that diamond engagement rings really started to become customary. Find out how diamond rings became today's standard:

The Renaissance marked the first well-documented appearance of the diamond engagement ring. Before this, during ancient times, Romans were known to give the bride two rings to wear in order to symbolize the marriage. Usually, a gold ring was given for the woman to wear in public and an iron ring was worn around the house. This practice continued for many years, and it became customary for a woman to receive two rings for an engagement. During the Middle Ages, there was a lot of controversy around when the ring should be given to the bride to honor the marriage. Pope Innocent II declared that there must be a mandatory waiting period after receiving a wedding ring, thus the engagement waiting period was born. The idea to give one special engagement ring and then add an additional ring during the wedding ceremony started to catch on.

In 1477, during the Renaissance, Archduke Maximilian of Austria proposed to Mary of Burgundy with a ring that was set with thin, flat pieces of diamonds in the shape of an “M.” This marked the first time that the world saw diamond engagement rings being used in this way. From that point on, people of significant wealth and higher social class started giving diamond rings for their engagements.

The Victorian Era & Diamonds as a Status Symbol

The demand for diamond engagement rings was still pretty dismal due to the lack of resources until the discovery of diamond mines in South Africa around 1866. With this discovery came a huge increase in supply for diamonds. By the year 1872, diamond mines were producing over one million carats in diamonds per year.

Because there were more diamonds available, diamond engagement rings became even more popular among the noble and aristocratic people. Diamonds were, however, still very expensive and those would could not afford them stayed true to using more traditional engagement bands. Diamond engagement rings were seen as unobtainable based on financial constraint by those with lesser means.

Diamond engagement rings became even less popular after WWII and even more when the Great Depression began. People weren't able to afford diamond rings anymore, so their popularity was quickly diminishing.

Things were looking pretty grim for the diamond industry at this point. There was research that had been done to indicate that engagement rings were going out of style with people in the younger generation. The excess amount of diamonds from the mines weren't being used and the mines were on the verge of being shut down.

The campaign first started by educating people on the basic 4 Cs of diamonds (cut, carats, color, and clarity). De Beers made sure diamond engagement rings were everywhere in the media so that people could see the brilliance of these rings. They wanted people to understand diamonds and really see their value.

Then, by 1947, De Beers introduced the phrase, "A Diamond is Forever," and the demand for diamond rings skyrocketed. The De Beers campaign was wildly successful. By 1990, 80% of all engagement rings had diamonds.

Other Recommended Articles For You: