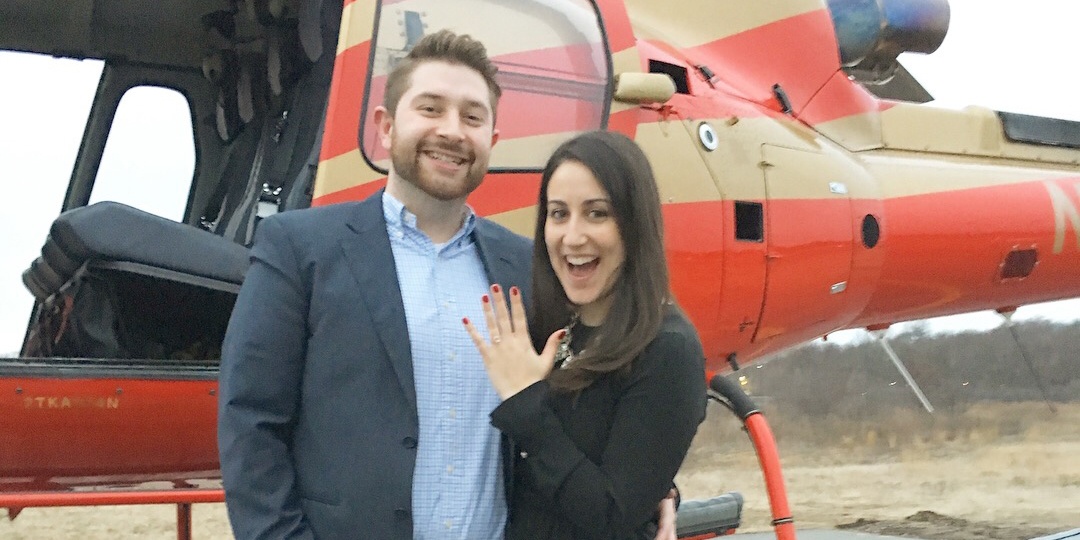 This proposal has us flying on cloud nine (literally)! Read on to see how Kyle surprised Stephanie with her amazing, new ring. On behalf of the entire Long's team, congratulations and best of luck.

"We met five years ago on a Grad School trip to South Africa. The trip was 15 women and Kyle. We started talking after the trip and have been together ever since!"

"Our 5 year anniversary was on February 13th. It was a busy week at work for me so we planned to celebrate it on February 24th at Gaslight in the South End of Boston. We were at our friends house that day dog sitting while they were away in Florida. Since I wasn't familiar with the neighborhood, I looked up how long it would take to get there and told Kyle we needed to leave by 6 pm. He immediately told me we have to leave the house by 4 as he had to run an errand prior to dinner. I didn't think too much of it, but was starting to get a bit suspicious. At 4 pm, he ordered an Uber Black car to pick us up. As a huge black suburban came to get us, my suspicions began to grow.

We started driving and driving and driving, and then all of a sudden we were on the Automile in Norwood. I was very confused and asked where we were going, to which I received a big grin from Kyle. We pulled up to Norwood Municipal Airport (which I didn't even know existed) and Kyle told the Uber driver, "Gate 3 please." Both my suspicions and my confusion were at all-time high. WHAT were we doing at an airport and WHY were we going to Gate 3?! After passing through the gate, we arrived at a massive red helicopter and were greeted by our pilot. He took a few pictures of us before we set off on a sunset cruise around the city. Once we got in the helicopter, I had pretty much figured out why we were there, but didn't want to get ahead of myself in case we were truly just going for a night ride.

We flew over Charlestown, Seaport, my old apartment in Southie, and then, as we were hovering over the Back Bay area, Kyle pulled out the ring box and proposed! It was like nothing I could have ever imagined! I was literally flying on cloud nine! We celebrated with a bottle of champagne and a dozen roses that the pilot (very sneakily) stashed under the seat prior to our arrival. It was the most amazing day of my life and better than I could have ever even imagined!!"

"It is the most BEAUTIFUL morganite ring set in rose gold with diamonds on the band and a diamond halo around the center stone."