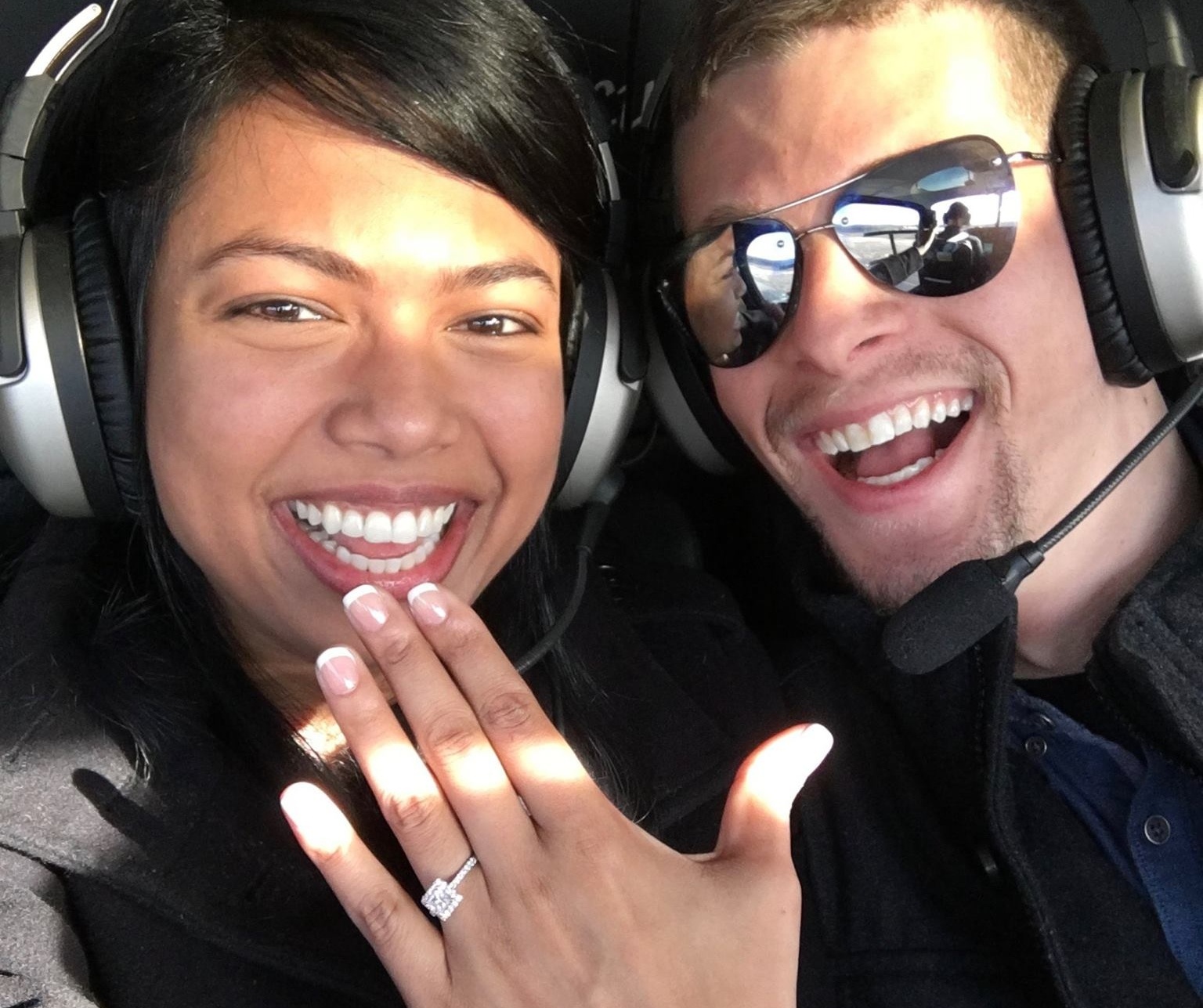 We are head over heels for this romantic proposal story from Benjamin and Sharmeen! You're going to want to read all the details that Sharmeen shares, including her reaction to the complete surprise that Benjamin pulled off. Congratulations from the entire Long's family, and we wish you the best of luck!

How did the two of you meet?
"It was Christmas Day 2014 in Kuwait. At the time Ben was serving in the US Marine Corps, working at the American Embassy Kuwait. Every year I would host a Christmas party, extending an open invitation for anyone wishing to celebrate. I appreciate being an expat that many are away from their homes and loved ones, and so it was a tradition of mine to welcome them in.

It was Ben's first day in Kuwait when, through our mutual friends, he heard about my party and he decided to join in on the fun. December 25th, 2014 became the day a complete stranger knocked on my door and walked right into my heart. We instantly hit it off and, long story short, later that year we officially started dating."

How did he propose?
"12 months ago, Ben was posted to China and our long distance relationship began. We saw one another as opportunities arose in different countries, usually every three or so months.

Another 12 months passed and my latest trip was to Boston. By this time Ben had settled back home, and like the Christmas before, we decided to spend this Christmas with his family. The excitement of just being with each other during the holidays was more than enough to cover up all his ongoing scheming.

Ben's family are extremely welcoming and we enjoyed a fun packed family Christmas Day. Come Boxing Day, one of his sisters wanted to go have her nails done with me, which is always a great way to have some fun girl time. Little did I know what was in store for me.

Later that day I was told that Ben would be taking me somewhere and it is a surprise. Ben often did such things so, with some excitement, I happily complied. We drove for about 40 minutes, all the time unaware as to our destination. Finally we arrived at an airfield housing small charter planes. At first I thought it was a mistake and the GPS had given us the wrong location. Ben however confirmed that we had indeed reached our destination. I said to him jokingly, “Just because I work for an airline, does not mean I can fly a plane!” He laughed and said relax you’ll find out soon enough.

We drove past all the small planes and parked literally next to a fierce black chopper. I was gawking at the helicopter like a little kid would for candy when Ben revealed that we would be going on that very thing. I was thrilled as I have never been on a helicopter before! The surprise however was far from over. 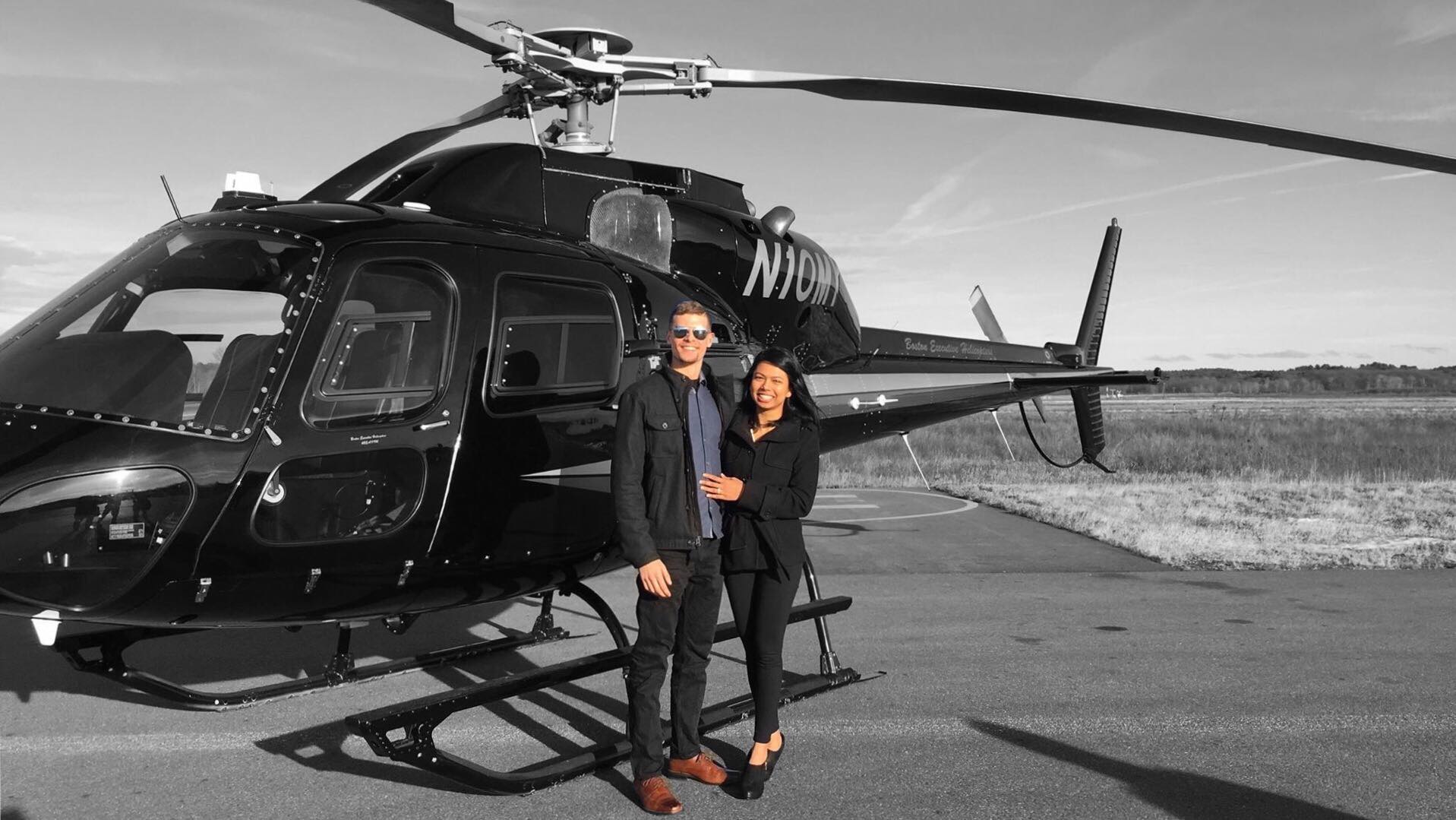 As I immersed in the breathtaking views of Boston from above, sometime while were hovering over Fenway Park, I looked around to find Ben on one knee holding a toy penguin (I'm obsessed with penguins). He looked at me and said, “I think by now you know how much I love you and I will spend the rest of my life trying to show you”. I was in complete shock at this point. As he opened the penguin in half there was this BEAUTIFUL engagement ring staring back at me. He continued, “and if you don’t want to be pushed out of this helicopter, you had better say yes! Will you marry me?” I immediately said YES…. ....the rest was history.

So here we are, future Mr. and Mrs. Shutt, ready for our married life to take off and take on our next adventure." 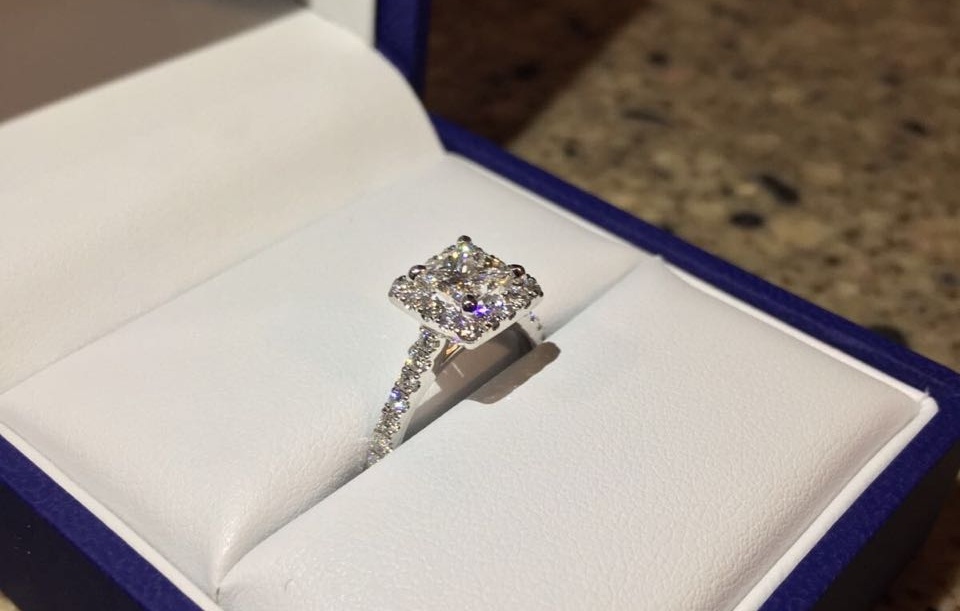 Tell us about your engagement ring!
"I absolutely LOVE my ring! It's a gorgeous princess cut in platinum halo setting. Thank you Long's Fine Jewelers for this stunning piece."