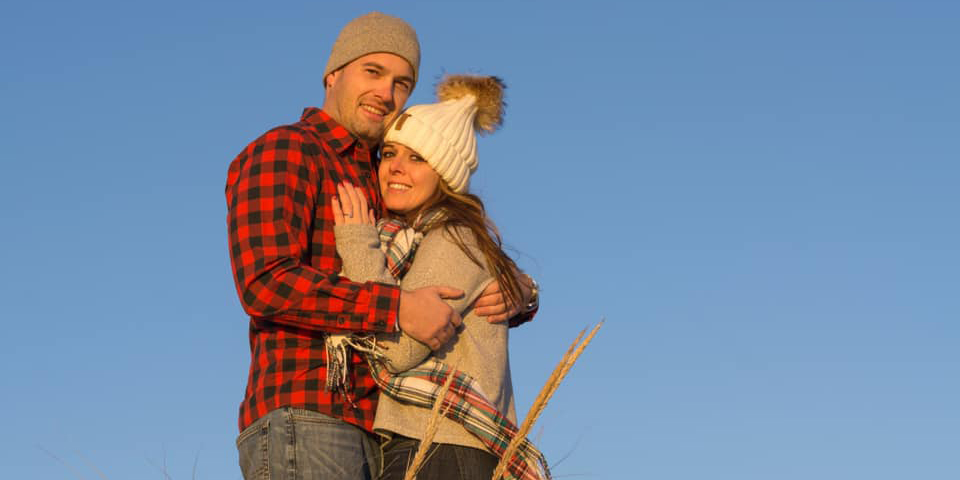 This trip to Maine ended in the best possible way! Read on to see how Jay surprised Nicole with her stunning, new ring. On behalf of the entire Long's team, congratulations and best of luck.

"We met at a local restaurant near our hometown during the annual night before Thanksgiving gathering." "We got engaged in Kennebunkport, Maine. Jay and I drove to Maine on a Thursday night after work. We were planning on going to the Christmas Prelude in Kennebunkport early Friday evening and decided to both take Friday off to make a day of it and go up early. Neither of us had eaten yet, so Jay made reservations at a restaurant we both favored in Kennebunkport. Jay was acting weird on the way up, driving slower than normal (later I found out it was because he was next to my parents on the highway, so he wanted them to get ahead of us). Jay also stopped at a rest stop to go to the bathroom, which he normally doesn't do when driving to his Maine house. Little did I know, he had the ring tied to the inside of his coat pocket, so he went to the rest stop to change locations of the ring and call his parents with an update. Then Jay took the wrong exit, making the drive even longer than normal, and when we finally got to the restaurant, he drove past it to park in an out of the way parking lot. Jay stated he did this 'in case we get a drink somewhere after dinner…'

We started walking towards the restaurant, when Jay said he wanted to take a picture at a store called 'The Best of Everything' where they had Christmas decorations and figurines outside. Jay said it would be crowded the next day when everyone was there for the prelude. I did not think anything of it as I love pictures and anything to do with Christmas. I was taking a photo, and when I finished, I turned around to see that Jay was down on one knee. I blacked out and did not even hear Jay say or ask anything besides 'I want to spend my life with you…' At first I said 'no' a few times, in shock, just because she wanted him to get up, but when he did I happily said 'YES!'

After the proposal, we walked over to the restaurant, where Jay, yet again said he had to go to the bathroom. All I wanted to do was call my parents, but Jay insisted we have dinner first and celebrate just the two of us. Wanting to respect his wishes, I did not call them, and sat impatiently in the lobby while Jay went to the bathroom. After he came out, he said our table was not ready yet so why don't we take pictures outside in front of the Christmas tree. While doing so, I noticed two women staring at us. Eventually as the women walked towards us, I finally realized it was both of our moms. Jay had surprised me again by having my parents drive up from Massachusetts, meeting Jay’s parents at their Maine home, and driving to the restaurant together to surprise us and celebrate. I had NO idea Jay had made reservations for the six of us. We celebrated with champagne at the restaurant, and then again at Jay’s parents house afterwards. The rest was history!

The remainder of the weekend was spent enjoying the Christmas Prelude in Kennebunkport, taking pictures on the beach, telling family and friends, and celebrating with friends at my annual Patriots Christmas Brunch. It was the perfect engagement, and, as I like to describe it, my very own hallmark movie."