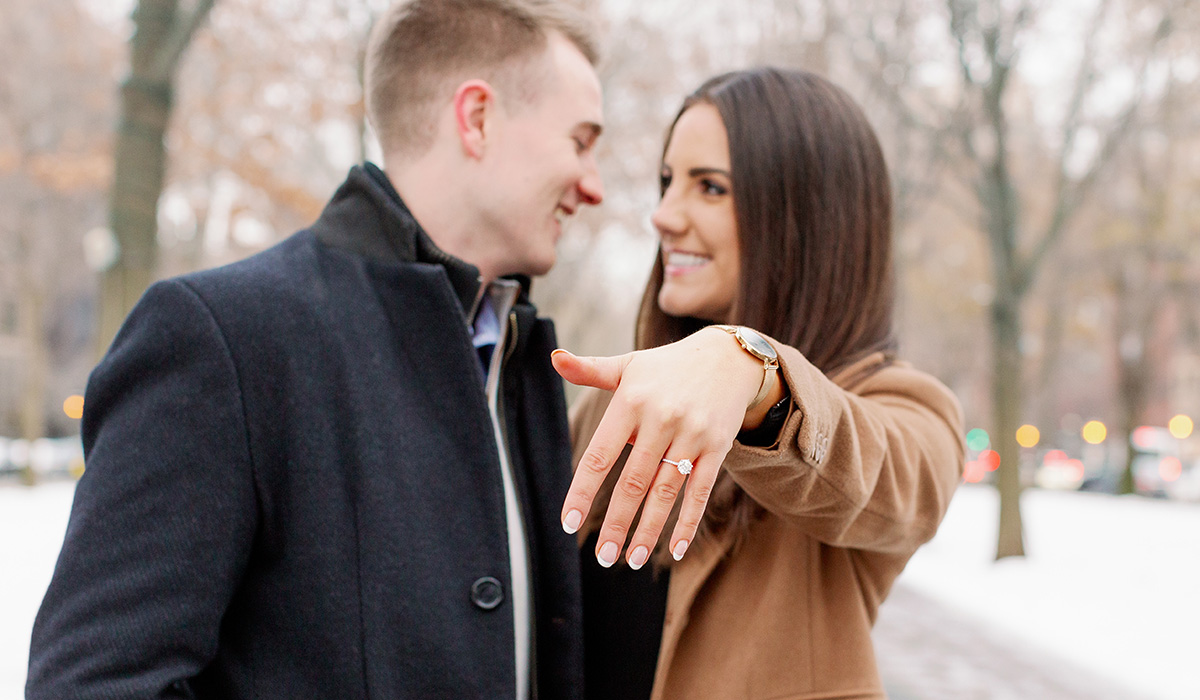 We're loving these college sweethearts picture perfect Boston proposal! Read on to see how Jonathan surprised Molly with her beautiful, new ring. On behalf of the entire Long's team, congratulations and best of luck.

"I first met Jon towards the end of my freshman year of college. We both went to college in Boston, but were at different schools. One of Jon’s best friends from high school went to my college, and Jon was visiting that weekend. That night, I ended up at a dorm party with a few girl friends in what turned out to be Jon's friend's dorm room.

Now, this is Jon’s favorite part of the story. He had just come back from studying abroad in Australia, so he had on a University of Queensland Australia sweatshirt. I saw him down the hall, and, as he was a really good looking, tall, blond guy, I thought, 'How could he not be Australian?' I walked right up to him and asked him if he was Australian. Sadly the answer was no, but we hit it off anyways and continued talking.

Due to the fact that we went to different schools and only met once at a party, we didn’t keep in touch after that first night in March. I actually ended up dating someone else later that semester, and it wasn’t until June when we reconnected.

Jon was on Facebook one day in June and saw me tagged in a photo with a guy on his club hockey team. Turns out this person is best friends with my cousin, and I grew up hanging out with my cousin and his friends. Jon asked his teammate who I was because he remembered me, but he didn’t remember how he knew me. Once his friend mentioned that I went to Bentley, it clicked. He friended me on Facebook, and we started chatting on there.

After a week or two of texting each other every day, Jon took me on a date on July 13th, 2014. That date was it for us. We knew we had something special. We have considered that date our anniversary for the past five years because all it took for us was one date to know we were it for each other."

"I had been waiting for Jon to pop the question for the past 6 months or so. It was something that was brought up in conversation probably every few days. Jon knew I was quite the detective, so he was doing everything in his power to throw me of. He even went as far as to have a serious conversation with me about how he did not want to get my hopes up because he didn’t have a ring yet, and he wouldn’t be able to propose till a month or so after Christmas.

On the day of the proposal, we had plans to meet our friends at a bar on Commonwealth Ave. in Boston. We got there a little bit early so Jon said let's walk around and see if we could find any Christmas lights near the Commons. Nothing was lit yet because it was still the afternoon, so he said let's just walk back down Comm Ave. He wanted to walk in the middle of the street though where there is a beautiful tree lined walk way. That was flag number one for me because Jon never wants to go for a leisurely stroll through the city. 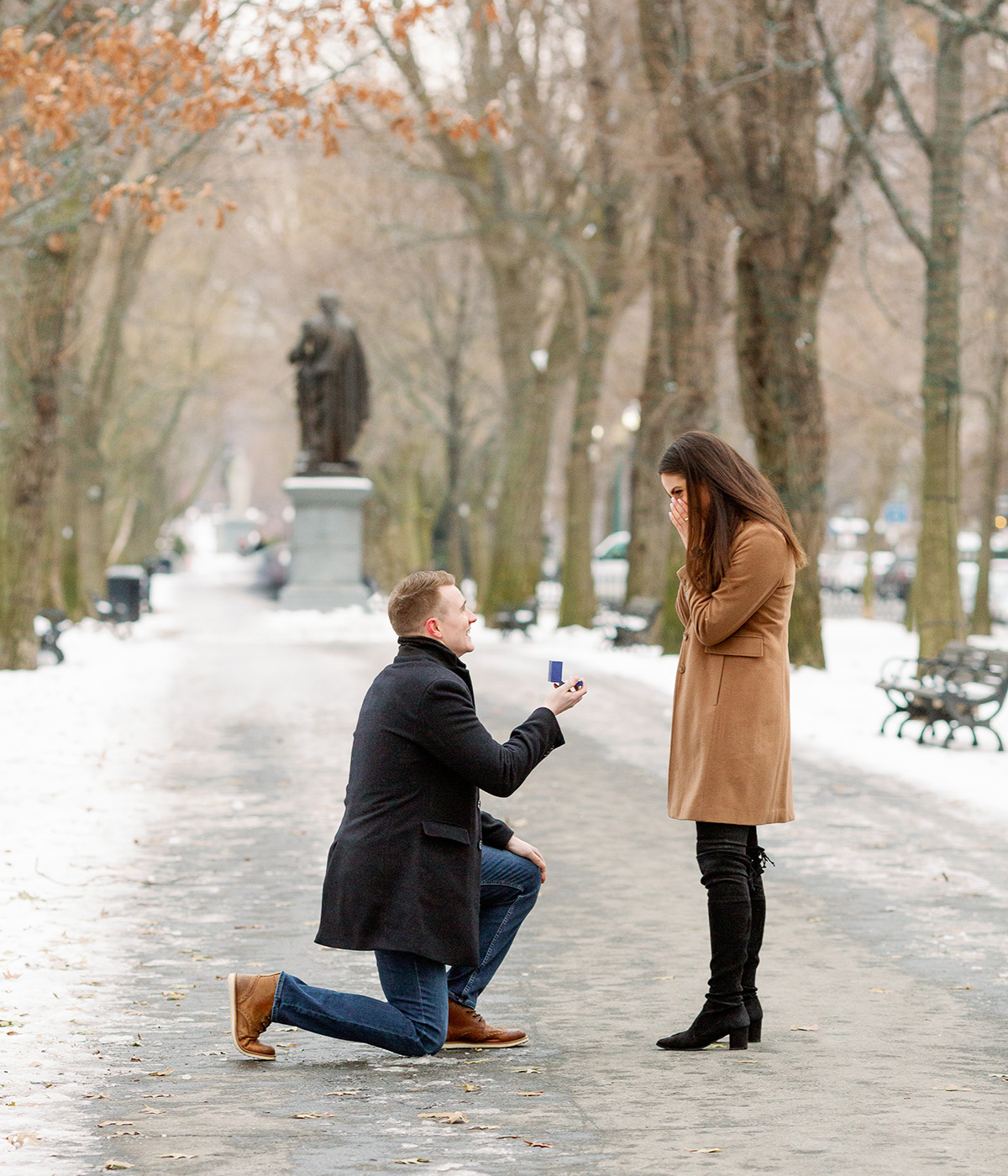 He then began to ramble on about why we decided to move back to Boston, and how much we both missed it here. As we were walking, I actually felt the ring box in his coat pocket. Jon played it off like it was his wallet, but in that moment I knew. He then came to a slow stop and turned to me. I said to him, 'Are you actually doing it?!,' and he said with the cutest face, 'Yes.' He then began to tell me how much he loved me and that he knew I was the one from day one. He knelt down on one knee, and asked me to be his wife.

We both honestly think we blacked out in the moment because neither of us really remember what was said. I remember him opening the ring box and being so blown away by the ring he had made. It was exactly what I wanted and more. It is the most beautiful ring I have ever seen in my life.

One of the biggest things I wanted for the proposal was for it to be photographed. Jon got an amazing photographer to capture the proposal and then walk around the city with us for a good forty five minutes capturing photos of our pure joy, excitement and love. 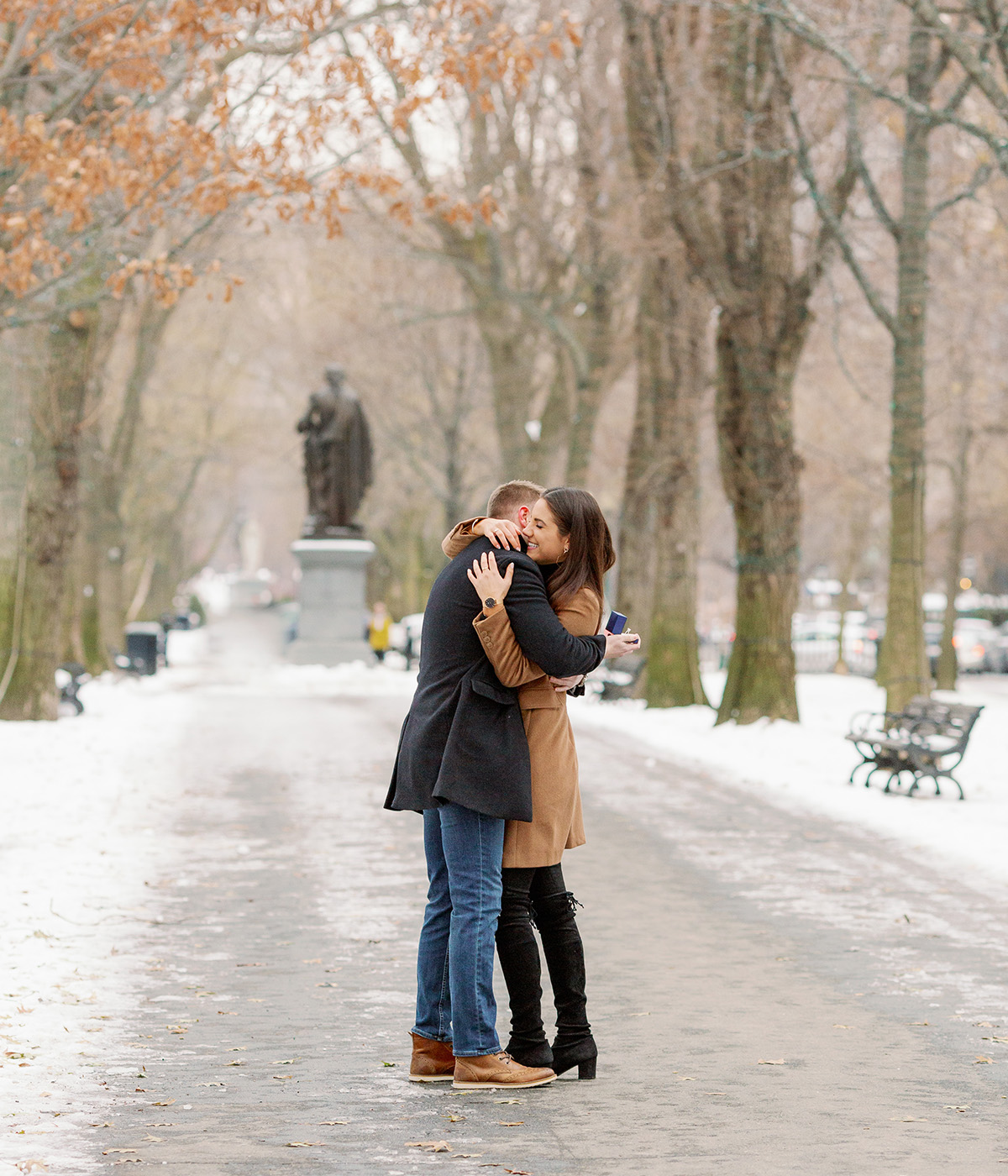 After our photoshoot, Jon told me that he made dinner reservations for my family and his family. When we got to the restaurant, I saw my family, but there were also a lot of phone camera flashes so I couldn’t see peoples faces. I soon realized it was all of our closest friends and family members.

The party was really the icing on the cake for me. It was so thoughtful and kind of Jon to plan something like that for me and to share our amazing news with the people that mean the most to us. My friends were so amazing and helpful to Jon with putting the party together; I truly can’t thank them enough.

I love Jon so much and I can’t wait to spend forever with him." 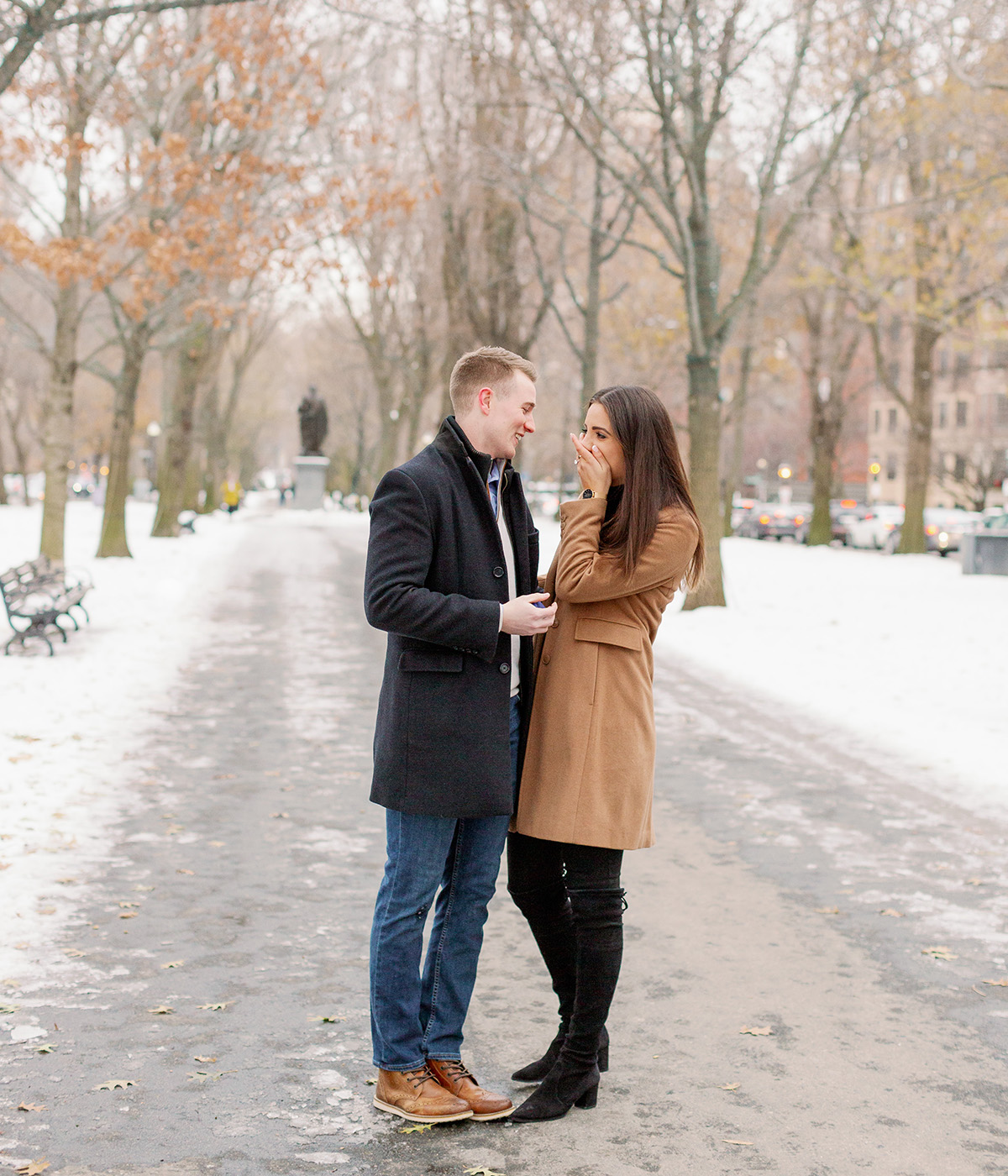 "The ring is exactly what I wanted! It is a round diamond with six prongs and small diamonds on the band. It's simple and elegant, but the diamond is the most beautiful diamond I have ever seen in my life. It is so clear and so sparkly. I couldn't be more in love with it."