There's nothing sweeter than a sunrise proposal! Read on to see how Matthew surprised Michelle with her beautiful, new ring on the top of Cadillac Mountain. On behalf of the entire Long's team, congratulations and best of luck.

"We met at UMass Amherst as honors orientation leaders for incoming freshman students. We were in our second year at UMass at the time. As orientation leaders, we did some team building activities together. We started talking while walking through the woods (now one of our favorite activities) at a ropes course in Western Mass. We connected about our hometowns, which are fairly close geographically, and common acquaintances through high school sports."

"What better way to start the 4th of July than with a drive up to the top of Cadillac Mountain in Acadia National Park for sunrise? Michelle and I woke up in slumbering Southwest Harbor, ME on Mount Desert Island at 3:00 am and started our drive over to Cadillac Mountain; we wanted a good spot, after all. We were some of the first sunrise hunters to arrive at the top of the mountain, yet red and orange streaks were already beginning to form in the eastern sky. We set up our camera tripod and began taking pictures of the rising sun. As Michelle went back to the car to retrieve something, I quickly slipped the ring out of my backpack and into my pocket, careful to remove it from its box so that she would not see it sticking out of my pocket and ruin the surprise. 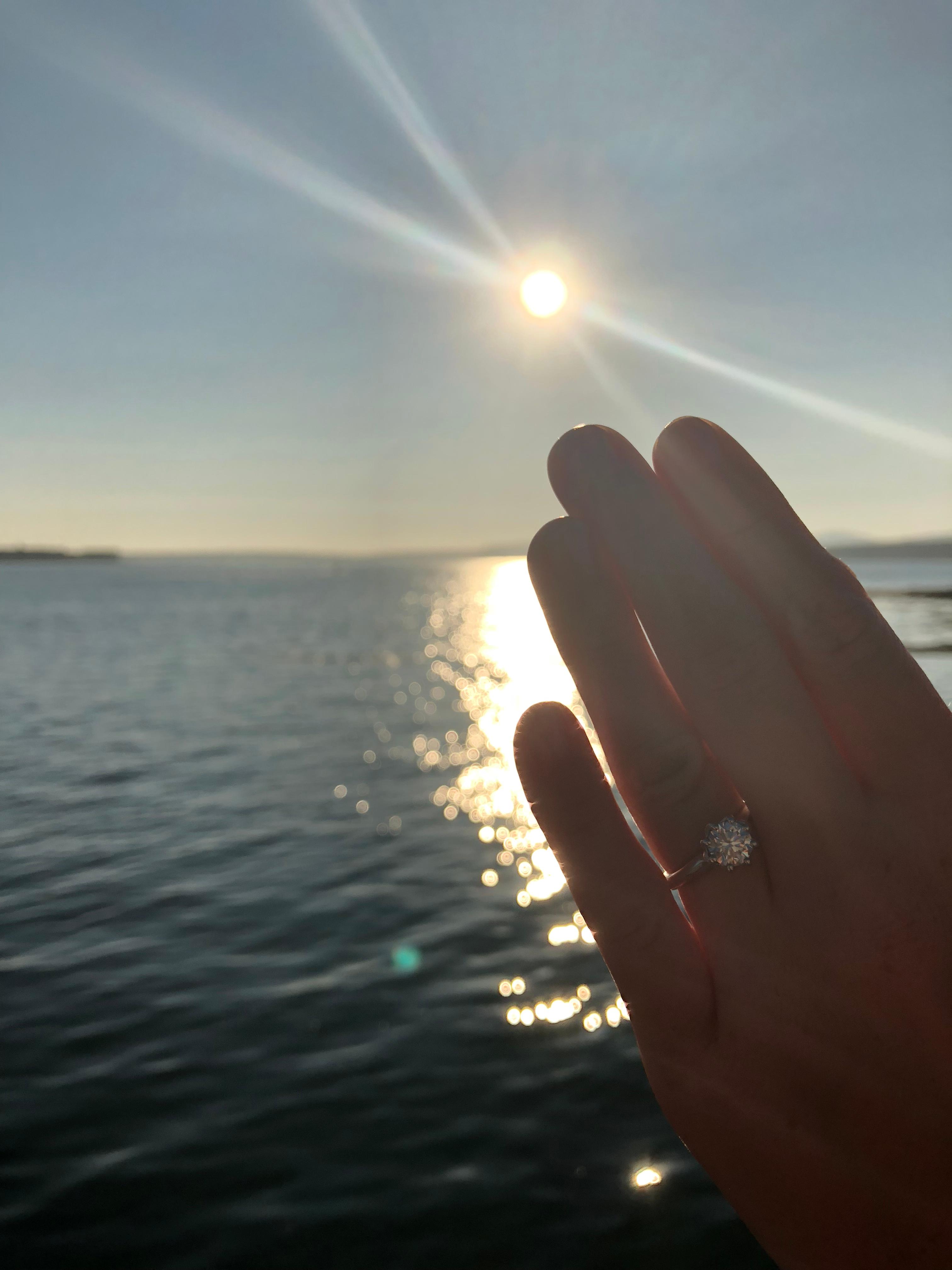 When she came back, I asked her to pose for some pictures in front of the tripod. I wanted to get the camera settings just right so that I could do a timed shot with both of us, where I would propose at the last second. As the sun rose steadily, more and more tourists arrived. We defended our 3:30 am claimed spot with all of our might. Finally, the sun peaked its face out of the ocean. We were some of the first people to see the sun rise in the United States that morning. Starting a new chapter in our lives together as the first light of the new day touched us and the United States seemed to me the perfect setting to get engaged. I convinced Michelle to take on more picture with me before we left. I set the timer on the camera, *beep*, sat down next to her, *beep*, grabbed the ring in my pocket, *beep*, went to get on one knee, *click*, I was too late. I failed to capture my proposal. The camera caught me in the motion of getting on one knee (looking like I was about to vomit). But I made it to one knee, and asked her, "Will you marry me, Shelly?" She said, "Yes!" and made me the happiest guy around. After, we went back to Southwest Harbor to share our joy with family and friends."

"The ring is a solitaire with a knife edge band in 18k white gold. She loves it!"