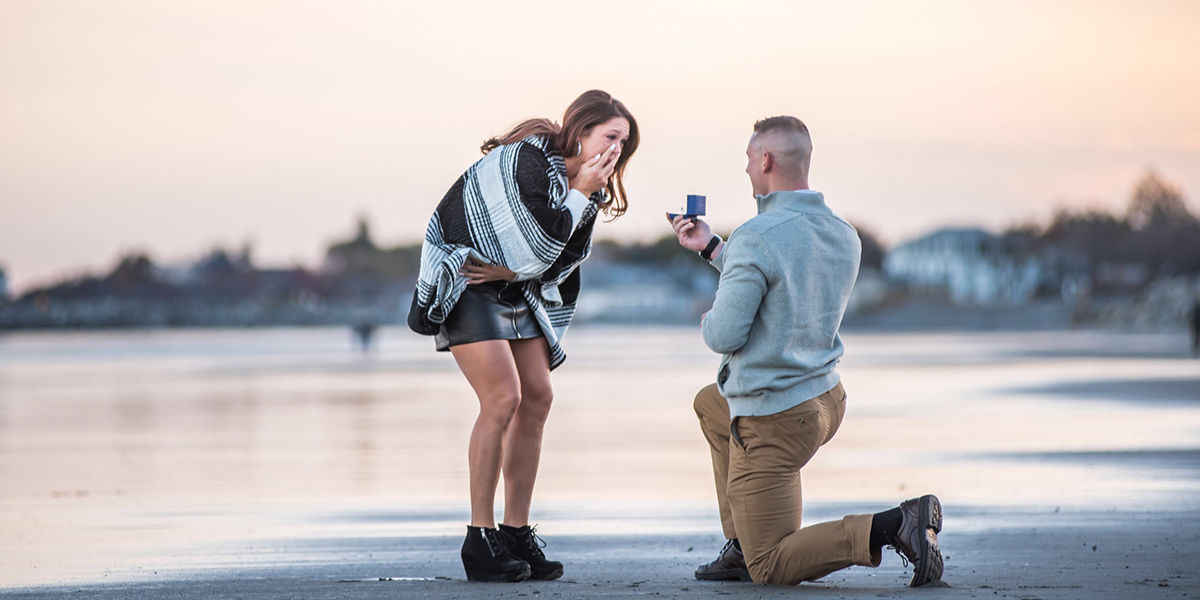 Could the perfect date get even better? Read on to see how Matthew surprised Alixandra with her beautiful, new ring on Jenness Beach in Rye, NH. On behalf of the entire Long's team, congratulations and best of luck.

"We met while I was interning at a gym/wellness facility my senior year of college. Matt had worked at the gym when he was in high school and still worked out there. He walked in one day and started talking with the woman I was interning with, Lisa. He was talking about the new gun he just bought. I am from central Massachusetts where I grew up on a lot of land and learned to shoot at a young age. I went to college at UMass Lowell where sport shooting wasn’t as “heard of” as where I grew up. I was immediately intrigued about his new gun and started asking questions. He said he was going shooting the next day with some friends at the sportsman’s club he belonged to, then he followed me into the Synergy class I was setting up for and asked for my number; he said if one of his friends backed out I could come, as he was only allowed to bring two guests at a time.

The next day I got a text from him saying that his friends were both going, maybe next time, and that was that. He came to the gym a few more times while I was interning, and we made small talk here and there. One time he came in and was talking with Lisa about his upcoming firefighter exam in three weeks. For whatever reason that date stuck with me, and on that morning three weeks later, I texted him wishing him good luck on his exam. He could not believe I remembered that from a casual conversation with Lisa and me weeks earlier. When the exam was finished, he texted me to say it went great. After that we started texting more and more.

Around his birthday, he went to dinner with his grandparents at Long Horns. I told him he needed to get the chocolate stampede dessert. That night, he sent me a picture of it saying it was delicious. He then said, 'Since you seem to love desserts so much, have you ever tried the New York style cheesecake with strawberries at the Cheesecake Factory?' I told him I hadn’t, and he said, 'Well then we should maybe go out and get some; how does next Wednesday sound?' I agreed.

Matt picked me up from my apartment after I got out of class. He held the door open for me, and I was shocked. He could not understand why that was so special, he asked, 'Doesn’t everyone do that?' I said not these days. The date was absolutely perfect. He was a true gentleman. At dinner we laughed and laughed. Conversation was going so well we forgot to look at the menu for the first half hour we were there. At the time, neither of us was looking for a relationship, but we just worked. We became best friends very quickly, and after four dates he told me he was falling in love with me. After four weeks, he handed me a promise ring one night and told me I was the one. Now here we, are four and a half years later, we just bought our first home together, we have both graduated college (twice), and established ourselves in new careers as a registered nurse and police officer." 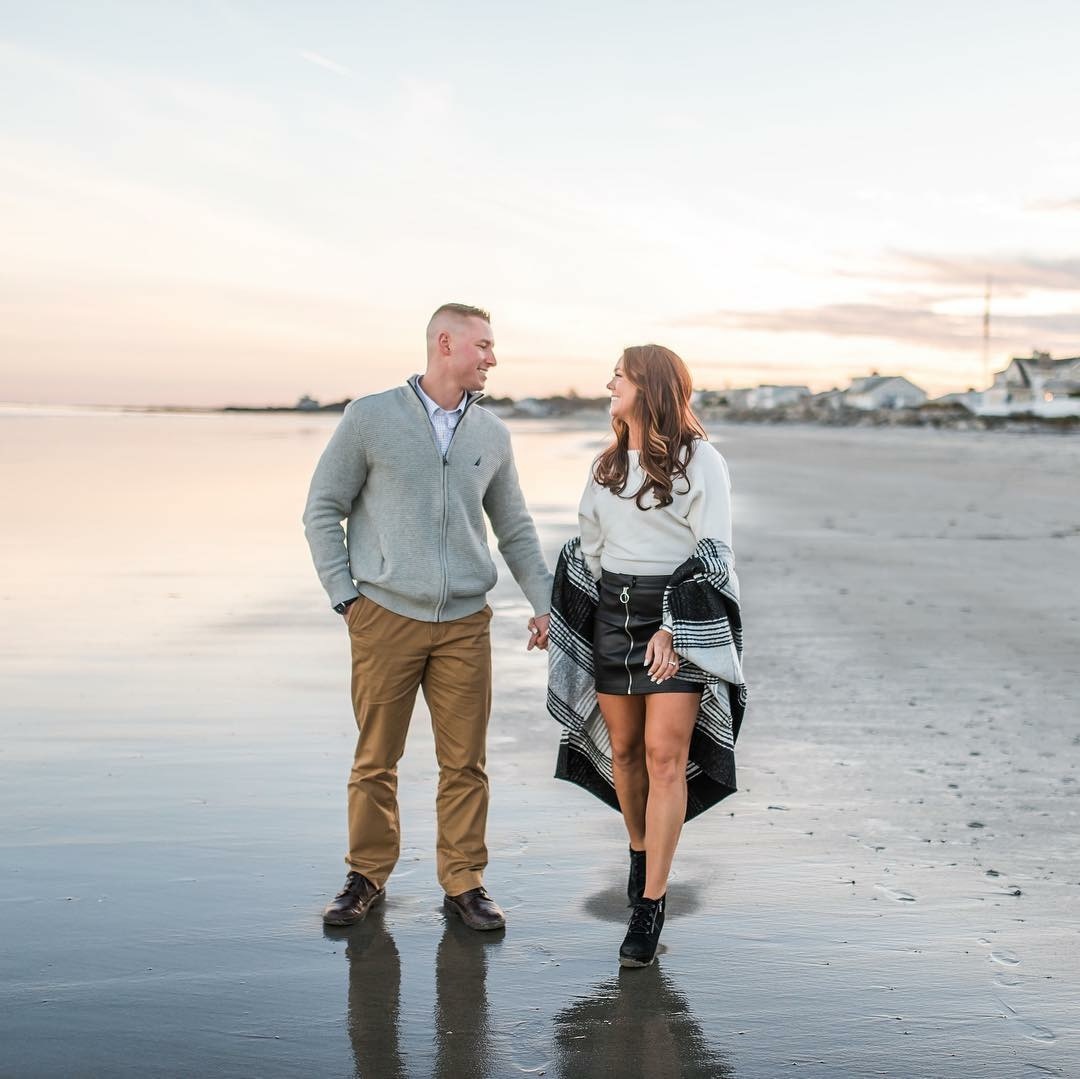 "The day the man of my dreams proposed was the most magical and memorable day of my life. Matt is one of the most hardworking men I have ever met. He never takes time off from work and is always pulling doubles or working extra details on the weekends if I am already working. About a month ago Matt said he had some ETO hours at work that he had to use. We coordinated our schedules and picked Friday October 26, 2018 to spend some time together. Since we recently bought our house in July we haven’t taken much time off to go hiking or to the beach or even to dinner like we normally always do.

After 4 and a half years, Matt and I know each other very well. He asked me what I wanted to do on our “date day” already knowing what I was going to say: make bacon and eggs for breakfast together, go hiking and enjoy the fall foliage, and then hit the beach for sunset before dinner. Little did I know, Matt had already been planning this day since he bought my ring back in July. Every night when I would leave for work, he would go to different beaches up and down the MA and NH coast to find the perfect spot to pop the question. He researched photographers to find the perfect person to capture the moment. He reached out to an acoustic band that we love to come and serenade me with “our song” later that night. He then coordinated with everyone to make sure the day would be just perfect.

In the weeks leading up to it, Matt played it very casual like it was just another date. He already knew that I would want to look nice and would have my nails done and a nice outfit so he didn’t even drop any hints. That morning we woke up and had a nice breakfast together. It was the most beautiful fall day; the air was crisp, but not too cold. We went and hiked Mount Monadnock, and then planned where to have dinner that night. Years ago Matt and I made a pact to always try new restaurants on our date nights, so when he suggested the Atlantic Grille in Rye, NH, I wasn’t the least suspicious. I looked up the restaurant and when I saw how close it was to the ocean, I begged him to take me to the beach first for a sunset stroll. We got home from hiking, got ready for dinner, and off we went.

When we were almost to the beach I said to Matt, 'Oh my God, this lighting is perfect! It’s the golden hour, can we please take a nice beach picture together?' He knows I love my pictures so as he always does, he agreed. When we got to Jenness Beach and onto the packed sand, I wanted to go right, but Matt wanted to go left. I said fine, and we started up the beach. He asked 'Do you want your beach picture before the “golden hour” is over?'to which I said yes! So I posed for my picture, and then Matt said to turn around for a candid backside picture. I love taking these kind of pictures so thought nothing of it, and turned around with my back to him. He told me to hold on for a minute and stay posed as my phone was being weird. After what felt like an eternity he said, 'Ok I got it, you can turn back now.' When I turned around he was kneeling down on one knee. I immediately burst into tears. That’s when he said, 'Alix, I love you, if it is not too late, will you marry me?' Through my tears I said YES and gave him a huge kiss. 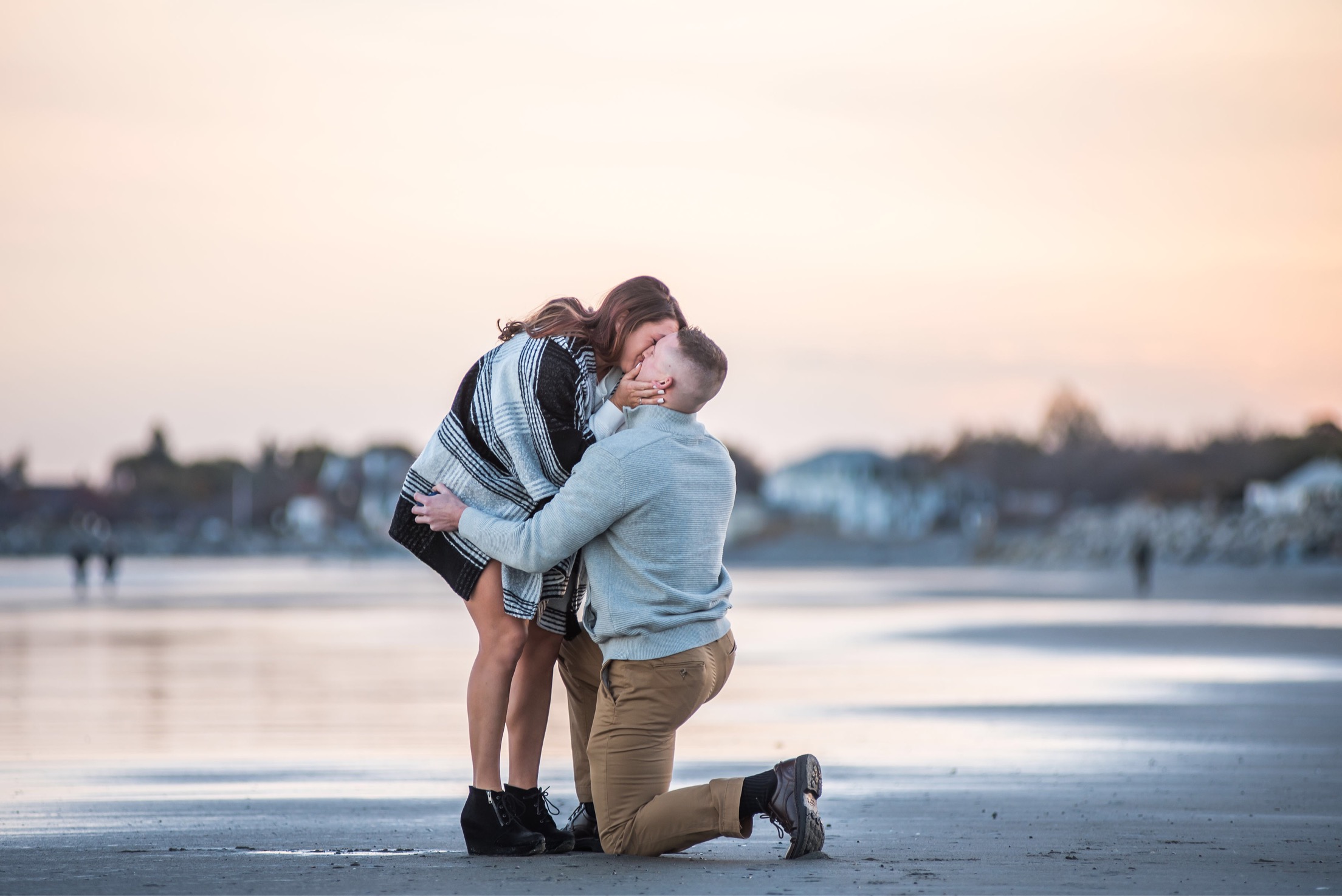 I cherished every second of that moment and that’s when he said look to your left, and there was a photographer with her camera and Matt’s GoPro capturing the moment. We took a few pictures, then Matt asked the photographer, 'Would you mind coming to the restaurant and taking a few pictures there?' She agreed and went on her way. Matt and I spent a few moments alone together embracing the moment, and then off we went to the restaurant. When we got there Matt asked if he could see the ring for a second and he took it off my finger. I was confused, but didn’t think too much of it. We walked in and Matt gave the hostess his name. She took us around the corner to be seated, through the doors of a private room, and in the room was both of our families and closest friends. They all shouted surprise, and I started crying again.

That is when Matt started his speech. He thanked everyone for coming to celebrate my special day, and at the end he looked at my mom and said, 'Now you can really call me your son-in law,' and he placed the ringer back on my finger. Everyone was as surprised as I had been and burst out into tears to congratulate us. You see, two weeks prior, Matt had sent out a text to our friends and family saying he was having a surprise dinner party to celebrate my new job. He even sent them a color coded diagram of where they could park so I wouldn’t recognize their cars in the parking lot. He had us all fooled and surprised. No one knew they were actually there to celebrate our engagement with us. It was incredible. Then, to top the whole thing off, he had the Houston Bernard Band there to play live music. They had learned the song “Eyes on You” by Chase Rice, which is “our song” and we danced to it in front of our family and friends. Matt thought of absolutely everything for this proposal. All of the months of his planning made this the best day of my life." 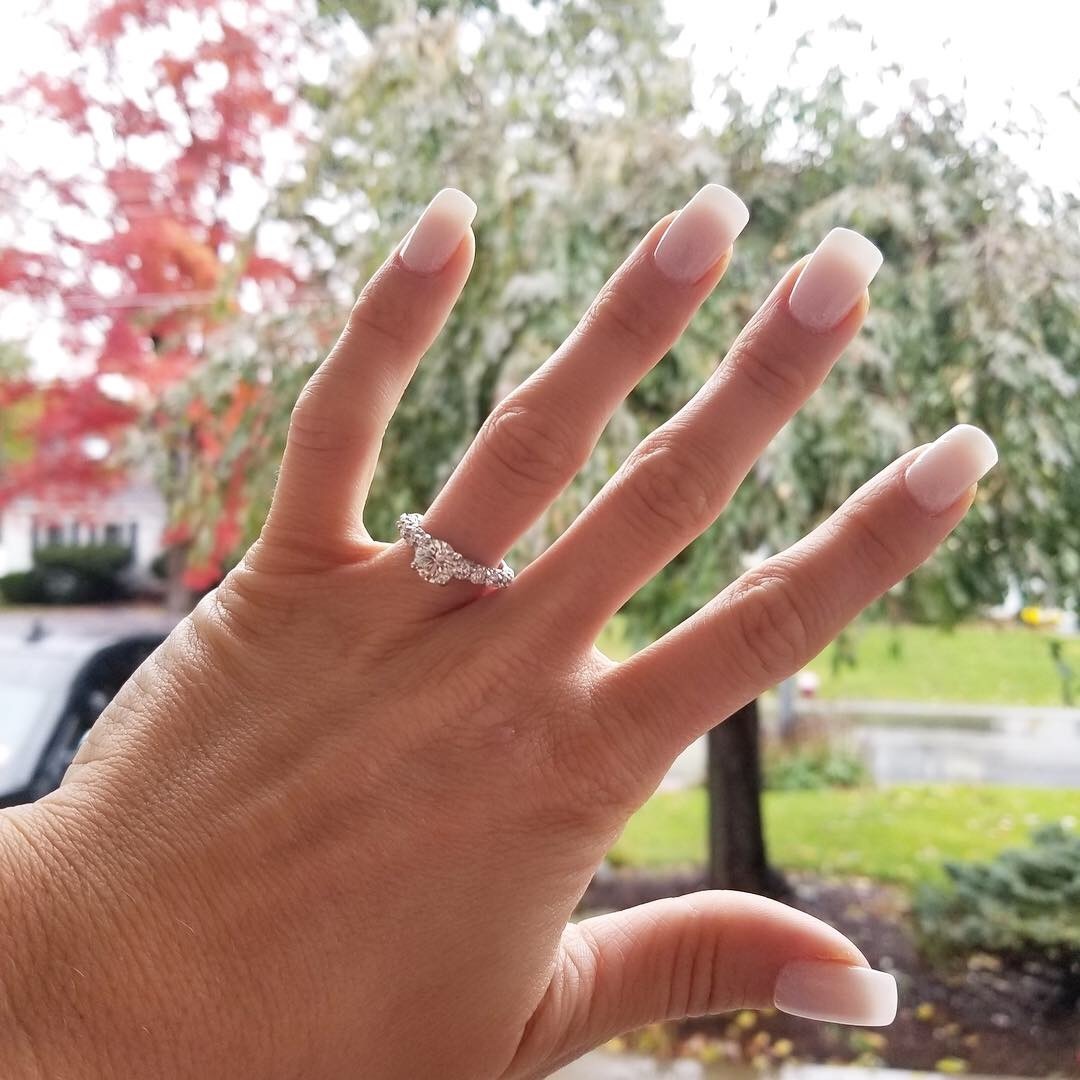 "The ring is a beautiful platinum setting with a 1.3 carat round cut center diamond and diamonds on the band."